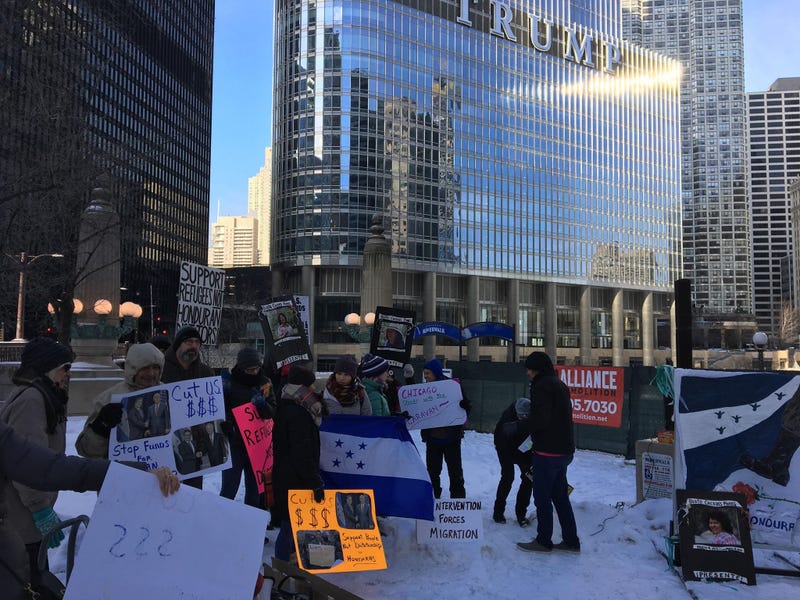 CHICAGO (WBBM NEWSRADIO) -- The bitter cold couldn't stop a small group of Chicagoans from gathering across from Trump Tower Sunday afternoon to protest the President Donald Trump's support of a Central American leader.

Matt Ginsberg-Jaeckle helped organize the "Refugees in, Dictator out!" rally at the corner of Wacker and Wabash.

"The message today is that if Trump doesn't want caravans fleeing from Honduras and coming to the U.S. border, he needs to stop sending military aid to the dictator that's forcing them to flee in the first place," Ginsberg-Jaeckle said.

That would be president Juan Orlando Hernandez, elected in January of 2018, an election that some have called fraudulent. It has led to protests, a state of emergency and over 30 residents being killed by Honduran authorities.

"Chicago is a city where we've closed 50 schools, where we've closed half of our mental health clinics, where we're constantly being told that we need to tighten our belts and cut back because of budget problems," Ginsberg-Jaeckle said. "Magically, the United States is finding hundreds of millions of dollars to send to an illegitimate dictator in Honduras to fund oppression."

Trinadel Sanchez said many of his family members have been forced to flee Honduras, which he called a "dangerous disaster."

"The kids have two options," he said. "They die or they become (gang) members. That's why those young people are fleeing to the United States. There are no jobs. The food they used to grow there, they're not growing it anymore."