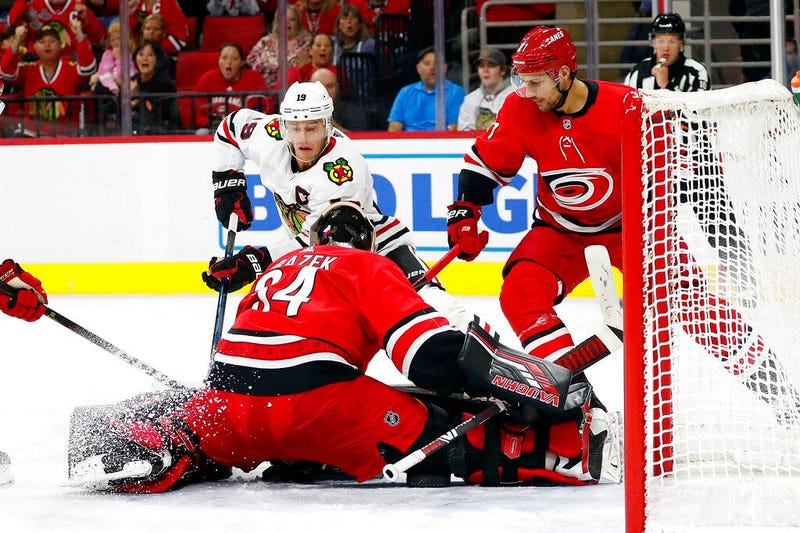 RALEIGH, N.C. (AP) — Petr Mrazek stopped 32 shots to record his second shutout in 12 days and the Carolina Hurricanes took advantage of the Chicago Blackhawks' continuing scoring woes in a 4-0 victory on Saturday.

Andrei Svechnikov scored twice and Nino Niederreiter had a goal and one assist for the Hurricanes (7-3-1), who broke a three-game winless streak as they returned home following a four-game road swing. Jordan Staal also scored, and Sebastian Aho had two assists.

Svechnikov opened the scoring with the first power-play goal of his career with a wrist shot over Crawford's right shoulder from the top of the faceoff circle in the game's fifth minute. Although Chicago challenged Mrazek with 24 shots on goal over the first two periods, Niederreiter stretched the Hurricanes' lead to 2-0 with another shot over Crawford's right shoulder in the final minute of the second period.

The Hurricanes had been 1-for-19 on the power play in their past six games before Svechnikov scored just five seconds into their first situation with the man advantage Saturday. Staal's goal also came on the power play as the Hurricanes went 2-for-2. ... Carolina is 6-0-0 this season when scoring the first goal, and Chicago is 0-4-0 when allowing the first goal. ...The Blackhawks' power play is 3-for-29 this season.

Blackhawks: Play host to Los Angeles on Sunday before beginning a streak of four straight games away from home.