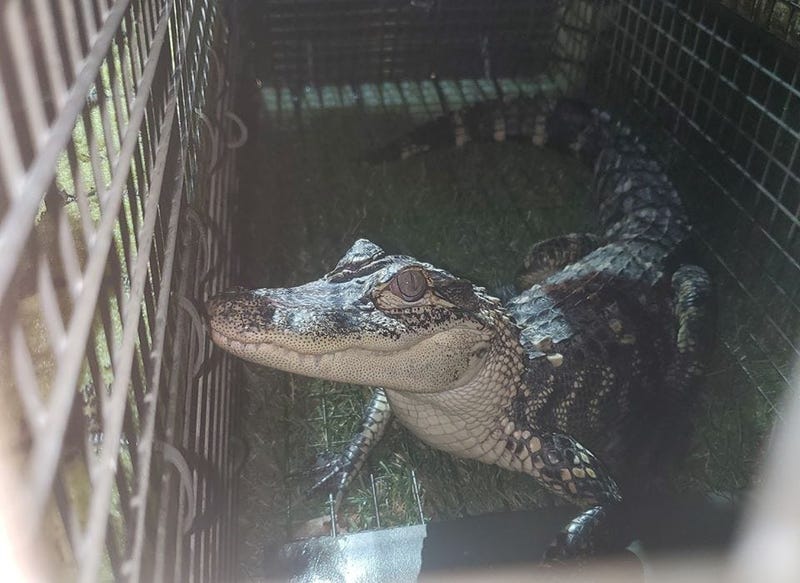 LYNWOOD, Ill. (WBBM NEWSRADIO) -- An alligator that was spotted in a small lake surrounded by homes in south suburban Lynwood has been captured, the Lynwood Fire Department announced Friday

The alligator, who has been named 'Alex' by a young resident, was captured safely. The alligator will be quarantined for 30 days, and then sent to a licensed reptile park in a southern state, the fire department said. The exact location has not yet been determined.

On Thursday night, the Lynwood Fire Department wrote on Facebook that traps were been set and baited.

"It is important for everyone to stay away from the Lake Lynwood shore line. As stated by the Illinois Conservation Police and a member of the Herpetological Society, a scared animal won't be hungry and won't go for the bait in the traps. They have very sensitive hearing and can feel vibrations of foot steps," the post read.

By Friday morning, the alligator was "safely" captured.

Officials in Lynwood responded Wednesday to Lake Lynwood after receiving a call about an alligator sighting. Lynwood police and firefighters searched the area to try to locate the reptile.

The Lynwood Fire Department posted a picture on Facebook of the roughly 3-foot-long alligator, which is a little smaller than “Chance the Snapper”, the alligator captured in the Humboldt Park Lagoon last year. The department said the alligator is "not an immediate hazard to animals or humans."

On Tuesday, some children originally spotted the alligator, and then several other residents also saw it and called officials.

RELATED: One Year Ago, Chicago Had An Alligator Adventure | 'Chance The Snapper' Released Into Alligator Sanctuary | Chicago Gator Hunt Cost More Than $33,000

It has been about a year since "Chance the Snapper" was captured from the Humboldt Park Lagoon, after different wildlife captors made multiple attempts that took over a week before being successful.