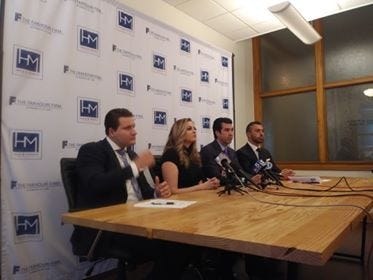 CHICAGO (WBBM NEWSRADIO) -- A second woman has come forward to claim that a Chicago nightclub has some culpability in an alleged sexual assault.

Elizabeth Capra filed a lawsuit Monday against Near North club El Hefe at 15 W. Hubbard St., saying she was sexually assaulted in 2014 after someone tampered with her drink. The second lawsuit brings more scrutiny upon the club.

Video surfaced last week of a 22-year-old woman leaving El Hefe on Oct. 18 with security guards, who she said threw her out into the alley behind the restaurant and stood by as she was sexually assaulted.

The club responded on Facebook, saying the female guest became ill and was escorted by the security team to the back exit, per protocol. The club said security did not witness any assault in the alley, but the video footage released seems to dispute that narrative.

“What we understand this woman has alleged is extremely troubling. Any instances involving crimes of violence, sexual or otherwise, are abhorrent," the club said in the statement.

Now, Capra is coming forward to share her assault experience at the club and encourages other women to speak up.

"Don't think your story doesn't matter," Capra said. "Do not be embarassed, don't be afraid."

She said it's important for women to stand up and share their traumatic experiences so people can be held accountable and stopped for their actions.

When she heard about the October case and watched the video, she said she wondered if that was how she was carried out of the bar. She said she feels horrible for girl, who filed as a Jane Doe.

"Obviously, I feel horrified for the girl ... that video is going to be there forever," she said.

The lawsuit alleges Capra was at El Hefe with her friends in 2014 and only ordered drinks from the bartender. She said toxicology reports revealed she had been roofied after drinking.

"You are expecting to be given something you ordered," she said. "I didn't order a roofie."

The lawsuit also states that she was taken to the hospital on the night in question and a rape kit determined she had been sexually assaulted.

She said El Hefe should be held accountable if employees at the club were involved.