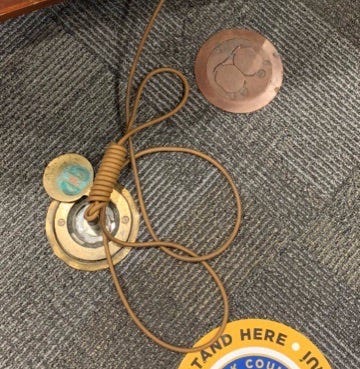 Photo credit This is the cord that defense attorney John Russell found at a lectern this week. (Cook County Sheriff)
By Steve Miller

CHICAGO (WBBM NEWSRADIO) -- A Cook County defense attorney reported that he saw a noose in a courtroom at the Bridgeview courthouse on Tuesday.

It was a cord under the prosecutor’s podium in courtroom 101, tied a certain way.

“It was definitely a noose and it was laying there, visible on the courtroom floor,” attorney John Russell told WBBM Newsradio.

Russell said he told the judge, and she notified the Presiding Judge’s office.

The attorney says the intent may not have been nefarious, but it was at least stupid.

“I believe in fair justice, and a noose is a sign of punishment,” he said.