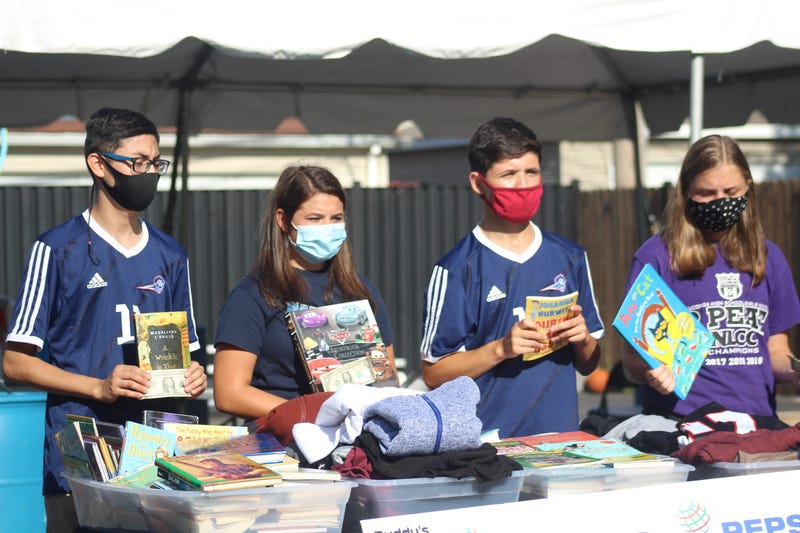 The donation effort was organized by Illinois student athletes from PepsiCo Showdown Series called Making A Difference On AND Off The Field campaign to show unity across the city and highlight organizations working on the ground to curb gun violence and create positive community impact.

“We may have lost a quarter or two of our high school career, but children, family and friends are losing their lives each and every day,” Oviedo said.

July also saw several children fatally shot, including a 9-year-old boy who was shot Friday on the Near North Side. Police said he was an unintended target hit by gunfire while playing in the area.

The number of shooting victims for July came in at 573, with at least 58 of them minors, according to the Chicago Sun-Times.

Chicago also saw its biggest mass shooting in recent memory that wounded 15 people outside of a funeral and a harsh Fourth of July weekend that saw 79 shootings, 15 of them fatal. Eleven of that weekend’s victims were minors, and two of the children — 13-year-old Amaria Jones and 7-year-old Natalia Wallace — were killed.

The group of student athletes speaking at I Grow Chicago, who were boys and girls from Wauconda, Montini, Bloom, Washington, Warren, Nazareth Academy, Solorio and other high schools in the Chicagoland area, want to bring attention to these devastating numbers and inspire children from high crime areas to see the opportunities sports can bring.

I Grow Chicago is home to 15 different programs from tutoring to yoga and sports for Englewood children, adults and families.

“It might be warm today, but we know the chiller days are coming and we want to help our friends at I Grow Chicago,” he said. “The greatest thing about the power of sport is that it brings together people from all different backgrounds.”

Making a difference on and off the field. Thank you @PepsiCoShowdown for this opportunity. @iGrowChi is a wonderful organization. All of these athletes showed grace while dealing with news of the future of high school sports in Illinois. pic.twitter.com/4iwJHNPNZW

Karen Clark, I Grow Chicago's director of wellness and an 18-year Englewood resident, said the donated check will go toward the Peace House's after-school programs and summer camps.

Clark said she is grateful for the donations from the student athletes but wants every young person at the event — and youth enrolled with I Grow Chicago — to think about policy change and how to dismantle systemic racism.