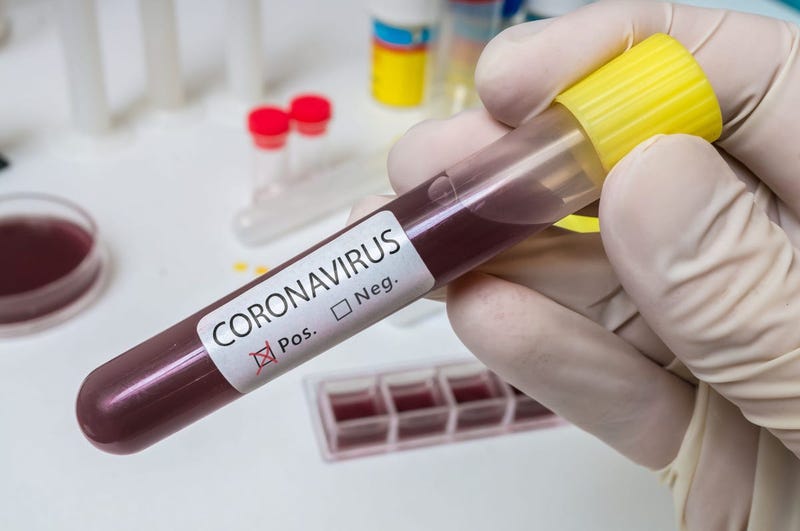 CHICAGO (WBBM NEWSRADIO) — New research from the University of Notre Dame reaches a simple conclusion about the coronavirus pandemic - we didn't do enough tests.

Notre Dame researchers estimate that more than 100,000 people were already infected with COVID-19 by early March — when only 1,514 cases and 39 deaths had been officially reported and before a national emergency was declared.

Notre Dame said its study provides insight into how limited testing and gaps in surveillance during the initial phase of the epidemic resulted in so many cases going undetected. The study was published in the Proceedings of the National Academy of Sciences.

“While we were focusing on people coming back from China, we were ignoring people coming from Europe, and actually quite a bit of the initial seeding of the virus into various parts of the United States came from Italy,” Perkins said.

Notre Dame said while awareness and concern over COVID-19 grew from January to March, it wasn’t until Feb. 29 that Washington became the first state to declare a state of emergency — closing schools and restaurants and imposing restrictions on large gatherings. By mid-March several states followed, but a lack of a coordinated national response created a number of variables as each state decided for itself how to react to a rising number of cases.

By focusing their analysis on the January to March timeframe, when little to no action had been taken on a wide scale, Perkins and his team were able to incorporate a constant into their models. While other studies provide a sense of how school closures and lockdowns slowed the spread of the virus, looking at transmission for the first three months of the year gave the epidemiologists a clearer picture of how the virus emerged and spread throughout the country so quickly.“It was such a crucial period in terms of how this situation started,” said Perkins. “We look at the United States now and compare it to other countries like South Korea or Germany, New Zealand or Vietnam, any number of countries who have done a much, much better job controlling transmission. The key differences really come down to the time period we examine in this study. Those countries had adequate surveillance up and running at that time, whereas we show that throughout most of February the United States missed the vast majority of infections that were already out there. This particular timeframe that we focus on is really important for figuring out how we got here in the first place.”

According to Notre Dame, the study used a simulation model beginning on Jan. 1, using data reported by Johns Hopkins University on confirmed cases and deaths, accounting for asymptomatic infections, case fatality rates and local transmission. Perkins and his team first generated an estimate of total infections in the U.S. through March 12. The team then factored in how detection of symptomatic infections changed over time and estimated the number of unobserved infections during this time.

“I think the fact that there were so many infections by the second half of February speaks to the importance of and what we could have done in terms of containment,” said Perkins. “If you think about Ebola or SARS (severe acute respiratory syndrome) or other emerging infectious diseases, there have been cases that show up in the U.S. or other countries where officials move quickly to get ahead of them. They isolate those people, they do contact tracing — and transmission is extinguished. I think a lot of us were hoping that would be the situation with this disease. By the time we got to February, the problem had grown so big, containing the virus wasn’t possible.”

The potential for misdiagnosis and the limitations of surveillance are huge issues across infectious diseases, especially emerging infectious diseases, he added. As illustrated in the COVID-19 study, while public health officials must work quickly to understand how a new virus functions, without appropriate testing or coordinated response strategies the risk grows for infections to go unreported.The study was supported by the National Science Foundation through a Rapid Response Research (RAPID) grant.