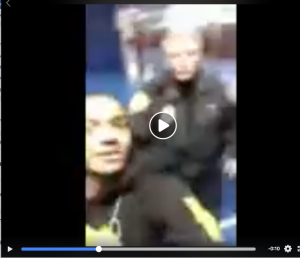 CHICAGO (WBBM NEWSRADIO) -- An Elgin Community College police officer was placed on leave after a confrontation with teenagers was posted to social media.

The grainy 14-second video shows an officer escorting two teens from a college gym while vulgarities are apparently exchanged. The video appears to show an officer push a teen forward.

Campus police had responded to the gym on Feb. 26 to reports that teens were climbing on closed bleachers without permission, Elgin Community College Police Chief David Kintz wrote Friday on the school’s Facebook page.

Kintz said the officers began to escort the teens from the campus, and that “one of the officers reportedly responded in a manner that is inconsistent with the values of Elgin Community College.”

The unnamed officer was placed on paid administrative leave while the department investigated the case, Kintz said. He added that the Kane County state’s attorney’s office was notified.

The mother of the two teens told the Daily Herald that her 14-year-old son was grabbed by the neck and tossed into a wall, breaking his lip. She reportedly said her son’s shoe fell off and that the officer kicked it down some stairs and used vulgarities.

She said her 13-year-old son was leaving a restroom when he heard yelling and an officer grabbed him, the Daily Herald reported.

Kintz said he spoke with the family involved. He asked the community to come forward with questions or concerns.