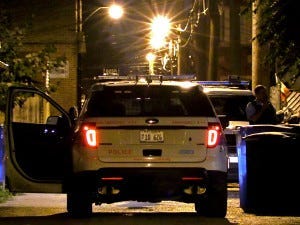 CHICAGO (WBBM NEWSRADIO) -- A man was killed and two other people were critically injured in a high-speed crash Friday in East Garfield Park on the West Side.

The man was speeding west in a Jeep SUV at 9:53 p.m. when it hit a parked vehicle in the 3100 block of West Lake Street, according to Chicago police. The Jeep then hit a metal pillar before coming to a stop.

The driver, 24-year-old Kenny T. Partee, was pronounced dead at the scene, police and the Cook County medical examiner’s office said. He lived in Lawndale.

An autopsy conducted Saturday ruled his death an accident.

Two women, 19 and 21, were passengers in the Jeep, police said. Both were taken to Stroger Hospital in critical condition.

No other injuries were reported. The police Major Accidents unit is investigating.