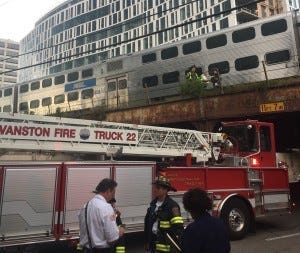 The man, thought to be in his 30s, was hit about 5:45 p.m. by outbound Metra UP-North train no. 337 near Lake Street, according to spokespeople for Metra and Evanston police.

He was pronounced dead at the scene, authorities said.

In #Evanston ⁦@Metra⁩ trains stopped in both direction as EPD and ⁦@EvanstonFD⁩ handle a person hit by the train. Trains will be stopped until about 615 pm ⁦@WBBM780Traffic⁩ ⁦@WGNtraffic⁩ ⁦@TotalTrafficCHI⁩ pic.twitter.com/GC7sKnDPRe

A pedestrian was hit and killed by the train I am riding on. We are now stopped in Evanston waiting for the investigation. It certainly puts things in perspective on a Friday evening. @WGNNews @ABC7Chicago @nbcchicago @WBBMNewsradio @cbschicago @fox32news pic.twitter.com/PshV2nPSV2

Metra trains were halted in both directions and experienced “extensive” delays, a Metra spokesperson said. The train who hit the person had been running express from Clybourn to the Evanston-Davis station. Service on the CTA’s Purple Line, which runs nearby, was unaffected. However, CTA is honoring Metra passes on the Brown, Red, and Purple Lines.

Police and fire crews responded to Lake Street and Sherman Avenue and could be seen in photos climbing a ladder to a train stopped on a bridge.

The Cook County medical examiner’s office has not released details about the death.