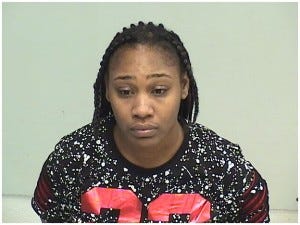 WAUKEGAN (WBBM NEWSRADIO) -- A woman is being held at Lake County Jail on charges she refused to hand over her 3-month-old daughter to the Dept. of Children and Family Services.

Jaela Gaines, 25, of north suburban Waukegan, was charged with child abduction after DCFS ordered her in Dec. 2018 to give up custody of her daughter, the Lake County sheriff’s office said in a statement.

Gaines allegedly refused to hand over her daughter and fled, the sheriff’s office said.

Authorities found out in Feb. 2019 that Gaines was staying at a motel in the first block of Green Bay Road in Waukegan, the sheriff’s office said.

On Thursday, the sheriff’s warrants team forcefully entered Gaines’ room at the motel and found her in the bathroom holding her child, the sheriff’s office said. Gaines’ daughter, now 6-months-old, was handed over to DCFS.

Gaines was ordered held on $200,000 bail by a Lake County judge, according to court records. She is due again in court on April 25.

A spokesman for DCFS did not immediately reply to a request for details Friday evening.