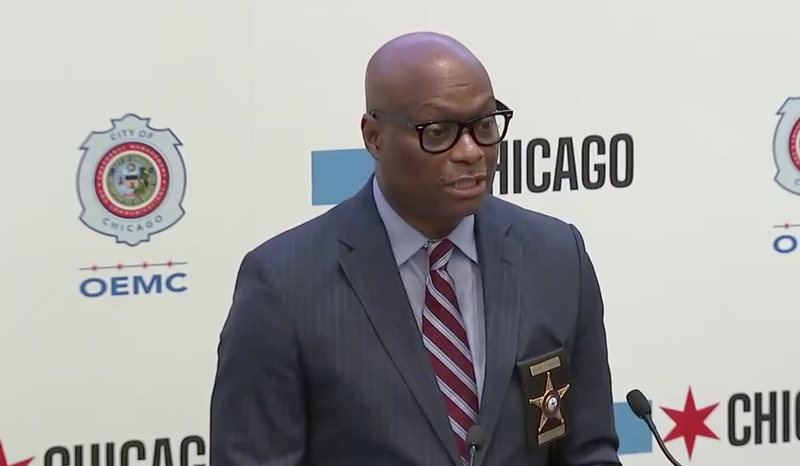 "As a police officer here or anywhere else in the country, one of the hardest things we'll ever encounter is responding to a fatal crime scene that involves children, especially babies," Supt. Brown

Among the 18 people fatally shot over the weekend, three were children. One was just a few months shy of turning 2-years old, Brown said.

"On Saturday afternoon, a mother and her 20-month-old son were shot in the 6000 block South Halsted Street in Englewood. The mother survived; the baby did not. Later that evening, an 8-year-old girl was injured when a stray bullet came through the window of her Englewood home and grazed her on the head," Brown said.

Also on Saturday evening, Brown said, a 10-year-old girl was inside an apartment unit in Logan Square when a bullet struck her in the head. She was later pronounced dead at Stroger Hospital.

"As a law enforcement professional, I can stand here and tell you that over the weekend, our officers made 22 gun arrests throughout the weekend and took 66 guns out of the neighborhoods," Brown said. "Just in the last six months, we seized 4,629 illegal guns in the city. This builds off the efforts in recent years as Chicago PD has recovered 10,897 guns in 2019 and 9,659 guns in 2018.

"As a dad, standing alongside other parents up here on this podium, I struggle to make sense of the reckless gun violence that continues to take the lives of our young people throughout the city. What I want to talk about are the guns we weren't able to get to on time. The guns and the cowards, these evil bastards behind those guns, that caused the senseless loss of life over the past weekend.

Like Chief Waller said Sunday, Brown said, when is it going to stop? When we have young, innocent lives lost?

"We all need to be outraged, all of us, by this violence. This is not just a problem for Englewood or Humboldt Park or any other neighborhood plagued by gun violence. We cannot compartmentalize the violence that is tearing families and communities apart. We are all part of this city; we all see its beauty, and we can no longer turn a blind eye to the violence here. I am pleading: Please help us bring these murderers to justice. We are tapping every resource at our disposal to ensure these killers never have a chance to get their hands on another gun and take another life.

"But make no mistake, as I said last week, and I will continue to repeat, we cannot do this along. We need the help of the entire criminal justice system, our city partners, and most importantly our community members to step up, and not only help us identify these perpetrators of violence, but to keep them off our streets until they get their day in court and to keep these violent offenders locked up and off our streets," Brown said.

Supt. Brown said the street corner open air drug market is the "pipeline to shootings and murders in Chicago." He said UUW arrests are the "precursor to violence" in Chicago.

"Open air drug market arrests are the precursors to violence in Chicago. Electronic monitoring and low bond amounts given to offenders endangers our residents and flies in the face of the hard work our police officers put in on a daily basis to take them off the streets. This will make our community safe," Brown said.

He said he will continue to bring attention to the sure number of offenders who are given little to no jail time; and low bonds and are placed on electronic monitoring that are not monitored by anyone and "go home to commit more crimes."

"Like last week, Leroy Battle, who was arrested in Aug. 2018 for UUW and plead guilty and sentenced to 18 months probation with special conditions - what did he do? He shot and killed two teen boys on 79th and Luella on Father's Day weekend. With the help of our community members, we were able to charge Leroy Battle for these heinous crimes that robbed two teens of their futures. And I want to thank the residents again or their critical partnership," Brown said.

Supt. Brown said he has been with the department for eight weeks, and continues to hear "you are new here."

"I will never accept, never, this level of violence. Never. Someone knows something about the murders. If you have any information, reach out to our detectives. You can also provide information anonymously through CPDTip.com.

"Silence emboldens, empowers those who continue to terrorize our neighborhoods. Now is the time to stand up and say, 'Enough is enough.' For God's sake, for the sake of Chicago's children, come forward with any information you have to help us solve these crimes," Brown said.

Chief of Detectives Brendan Deenihan said in order to solve these crime, the Chicago Police Department is going to need the help of everybody, including the community, "because there are people out there who know who committed these acts and we are going to need the information."

In the Englewood case, Deenihan said detectives are trying to track the car involved in the shooting.

"The motive for this particular incident, we believe they were targeting the father of the child. A lot of times he would drive this red vehicle, and that's why they shot into this car," he said.

Deenihan said in the case of on shooting of the 10-year old, members of a gang were "hanging out in that area" and an opposing gang member from almost a block away shot down the alley. The bullets went through a home and hit the girl in her head.

"Once again, it's gang on gang violence. It's outdoors. It's shooting with a handgun. And the opposing gang, they know who did it. And at this point, we need the information, once again," he said.

Detectives have info on the suspected vehicle(s) and are putting photos and video together, Deenihan said.