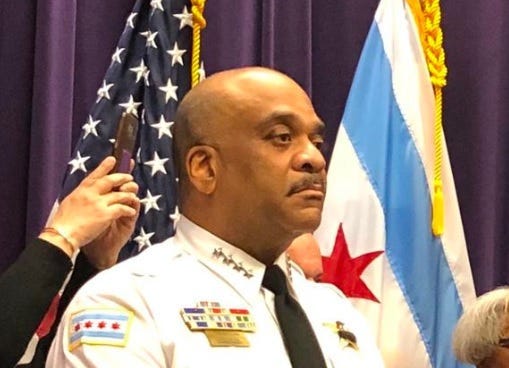 Johnson, voice breaking, announced Thursday, "it's time for someone else to pin these four stars to their shoulders. These stars, that sometimes feel like carrying the weight of the world. But I am confident that I leave CPD in a better place than when I became superintendent. I will help with the transition to the new superintendent however possible. CPD needs strong leadership. I want the next top cop to continue making the improvements in public safety and in the department that I love.

"I would be disingenuous if I didn't say this job has taken its toll. It's taken a toll on my health, my family, my friends, but my integrity remains intact and I am proud of what the department has accomplished during my tenure," Johnson continued. "I want to thank all of my command staff and the officers on the street for believing in me and instituting the changes that have been made in this city. This city is now a safer place to live, work, and play. I also want to thank my family for always being by my side. They have sacrificed a lot. But mostly, I want to thank the people of Chicago, because I will never forget holding their hands and praying with mothers, who have lost their children to gun violence. I will never forget the hugs from strangers, who have thanked me for bringing peace to their block. I will forever remember the selfies with the small children that reach out to every day."

"I hope that the example that I have set inspires someone - maybe another kid from the South Side, maybe it inspires that kid to work hard and do the right thing, and maybe even join the department. I don't think anyone would have thought the son of Eddie and Octavia Johnson from Cabrini Green would someday lead the second largest department in this country. I have been blessed to have this opportunity and I am thankful for the people of Chicago for trusting me with their safety. A very heartfelt thank you to Mayor Rahm Emanuel for having the wisdom, the foresight, and the vision to give a kid from the South Side a chance. And thank you to Mayor Lori Lightfoot for being a trusted friend and partner and continuing that. God Bless CPD and God Bless Chicago," Johnson concluded.

The official announcement of Johnson's retirement came in Thursday morning from Chicago Police Chief Communications Officer Anthony Guglielmi, who tweeted, "A true son of Chicago who grew up in public housing & went to public schools went on to become one of our most dedicated public servants. #ChicagoPolice Supt Eddie Johnson will announce plans to retire as leader of the nation's second largest police department. CPD HQ @ 1045a."

A true son of Chicago who grew up in public housing & went to public schools went on to become one of our most dedicated public servants. #ChicagoPolice Supt Eddie Johnson will announce plans to retire as leader of the nation's second largest police department. CPD HQ @ 1045a pic.twitter.com/CVc7EaP4mP

Johnson started the press conference with his story, before officially announcing his retirement.

"It's a story of a kid who began his life in Cabrini Green and later moved to the South Side. My family settled in Washington Heights. My parents loved us and set an example that continues to serve as the foundation of who I am today. They worked hard. They taught us to always to our best. They taught us to always do what's right. But like too many children in Chicago, I experience the trauma of gun violence firsthand as a child. I saw how these unspeakable acts could tear a family apart..." Johnson said. "I could have easily learned to hate this city. But my family taught us to love it and they supported us. At first I enrolled in college at Eastern Illinois University as a pre-med student, but a career in public service beckoned. I felt my Chicago roots would give me a big leg up as a cop. I know this city. I grew up surrounded by blue-collar families that are the life-blood of this blue-collar town. I took the police test and enrolled in the police academy on the 2nd of May 1988. I wanted to keep Chicago safe. This is my home and it is the only home I have ever known. I worked my way up through the ranks at CPD, becoming the chief of the bureau patrol, and then in April 2016, former mayor Rahm Emanuel surprised everyone by appointing me superintendent. Rahm Emanuel saw something in me that I didn't see in myself. I have led the nation's second largest police department ever since."

He continued by discussing the department's achievements since he became superintendent.

"To move CPD forward, I decided to invest in manpower, technology, and to reinvent the Office of Community Policing. I am proud to say now, CPD has 13,400 officers and 18 percent of these officers have gone through the academy within the last three years. With so many new officers, it was important that we get it right when it comes to training...One of the most significant achievements over the last three and a half years has been mandating a continuing education program for every officer, which was not the practice prior to 2016...Early results of our training efforts are in and I am excited to report, and this is one statistic that I am incredibly proud of, police-involved shootings are at their lowest levels in a decade - down 80 percent this year compared to where we were in 2009. In 2011, to this date we had 91 police-involved shootings. Today, November 2019, we have 16," Johnson said.

"Now I had my doubts sometimes about our strategies, but the numbers tell us that what we have been doing is working. It's perhaps best to compare this past summer to the summer of 2016. This past summer, murder was down 41 percent, compared to summer of 2016 - that translates to 141 murders this summer, as compared to 240 murders in the summer of 2016. That's a difference of nearly 100 lives in just the summer months. That's 100 fewer funerals. That's 100 fewer sobbing mothers and fathers...So reducing these shootings in the city that I love has been one the greatest accomplishments of my career. And it is with that in mind, that I want to announce my retirement today."

Earlier this week, Johnson announced at the CPD 2020 budget hearing that he was contemplating retirement.

"When my family and I went to London for the Bears game, that's the first vacation like that I've had since I became superintendent," Johnson said. "And I looked at my family and it made me realize how much of a sacrifice you make for your family when you take on positions like this."

Johnson, 59, said his departure would hinge on his desire to spend time with his family. He has worked for the Chicago Police Department for 31 years, and has been its leader since 2016. Johnson was named superintendent following the release of dashcam video of the fatal police shooting of Laquan McDonald.

Chicago’s inspector general is investigating an incident last month in which police officers found Johnson asleep in his car. Later, he admitted to the mayor he had some drinks before that. Johnson attributed the incident to a switch in blood-pressure medicine and said he isn’t worried about the investigation.

Johnson, a veteran of the Chicago Police Department, was hired as top cop in 2016 under then-Mayor Rahm Emanuel in the wake of the Laquan McDonald scandal. He has had highly publicized health episodes, including a kidney transplant. His son was the donor.