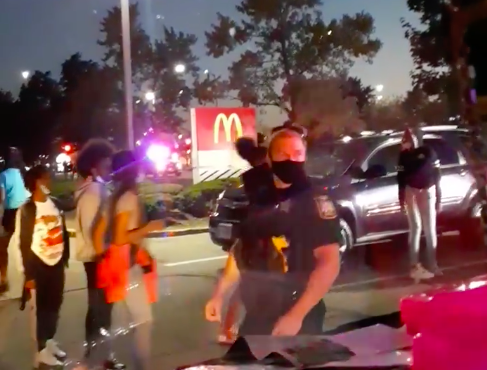 September 5, 2020 09/05/2020 7:05 pm
(WBBM NEWSRADIO) -- A video posted to social media shows dozens of teenagers fighting, as well as shouting and running from police outside Gurnee Mills Friday night.
Latrisha Cole, who was parked at a nearby McDonald's, witnessed the incident and caught it on video. As of Saturday, the video has been viewed 15,000 times.
She said teens were at the mall trying to go to the movies, but the theater closed at 7 p.m. and they were told to leave the property.
"It was more of personal reasons with teens as to why they were fighting," Cole told WBBM. "Other fights broke out to protect sisters or cousins."
The fights escalated when police came out, shouting at the teens to go home.
"(It) caused kids to get more aggressive and the officers were unable to get control. Kids were calling and waiting for their rides but being forced to get off property, told they would get arrested if they went into the restaurants," she said. "I did see officers chase and grab kids slamming them against cars."
Cole posted a Facebook Live video that night urging parents to come pick up their kids and ended up driving several of the teens home in her van.
Detective Shawn Aylor, a public information officer for the Gurnee Police Department, said officers arrived to break up groups of small fights at the mall but no arrests were made and no injuries were reported.
The officer's main goal was to disperse the crowds and get kids to go home, Aylor said.