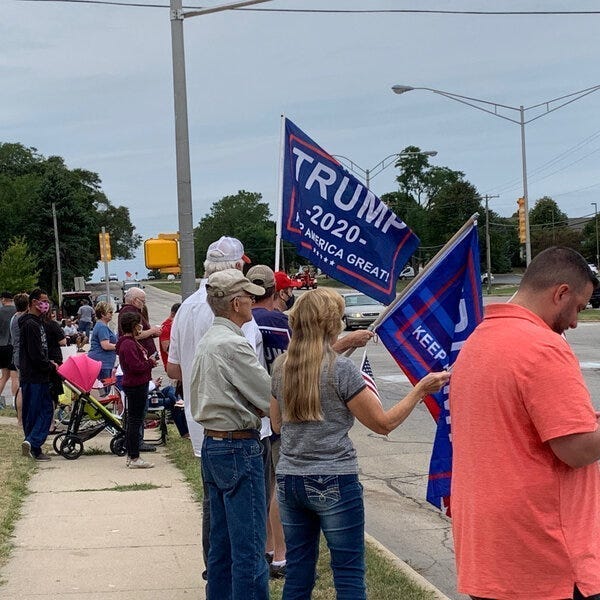 CHICAGO (WBBM NEWSRADIO) -- Opinions about President Trump were in abundance in Kenosha, Wisconsin during his visit Tuesday - for, against, or neither.

Most of those who waited outside the staging area for law enforcement and the National Guard were President Trump’s supporters, and they cheered as he arrived and left.

But Gary Becker called the President’s visit nonsense, and disagrees with his view that authorities must dominate the streets.

"I guess if you militarize all the cities that might work, but I don't think that's where we want to go," he said.

On the other hand, a young woman named Ana was there not to cheer the President, but the National Guard who were deployed.

"I was at home, scared, just worried about what would happen to Kenosha; and having them be here...I think it's a blessing," she said.

The President’s message of law and order comes a week after people like Jacqueline Kafura, who’s spent time in Baltimore, saw buildings in their own neighborhood burn, or be looted.

"Well since I spent my last four summers in Baltimore and I witnessed Freddie Gray; I live here, my daughter goes to Hopkins, and I am very disappointed in my city," she said.

From Chicago, Ja’Mal Green, with Black Lives Matter, was there to say he’s not satisfied with any message he’s hearing.

"Neither side is fighting for the average Joe that is on the ground," he said.

But the President promised $4 million to help businesses rebuild and that message was welcome news to them.

Generally, the mood remained respectful among the crowd, if not unified