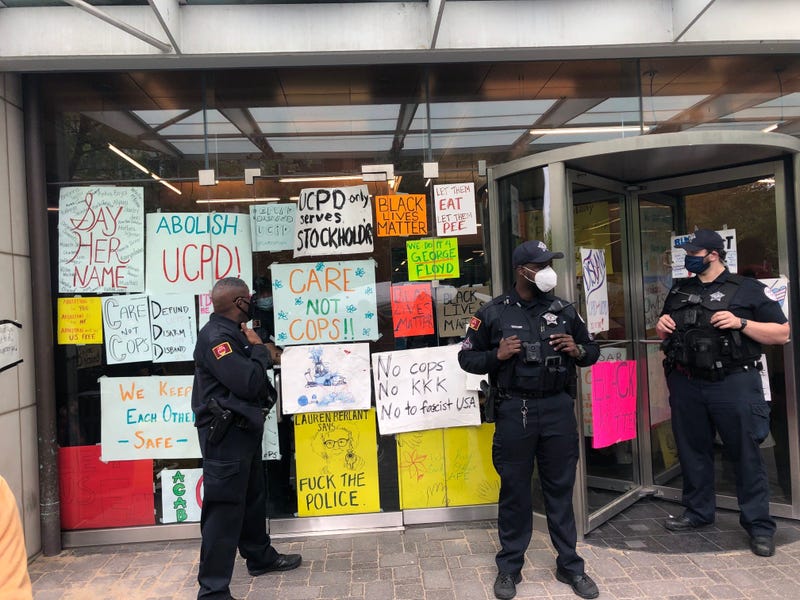 CHICAGO (WBBM NEWSRADIO) – University of Chicago students occupied the campus police building for 20 hours to demand the university defund its police officers and reallocate its funds to grassroots projects on the South Side.

On Friday, about a dozen members of the #CareNotCops campaign, part of UChicago’s Student Action, set up camp inside the building starting at 2:30 p.m. for a rally and demonstration that lasted through the night and ended about 10:30 a.m. Saturday, when the protesters inside came out to join those on the street who had set up tents with food and water and slept outside.

The protesters, chanting "Abolition is for you" at the few cops standing outside the building Saturday morning, are calling that the university defund, disarm, and disband the UCPD and disclose all its related finances. Demonstrators planned to occupy the building until administrators agreed to meet the group to discuss their demands, but after inside protesters came out in the morning, the protest slowly ended around 11 a.m. — but not before protesters chanted, “We will be back.”

U Chicago Police Chief Kenton Rainey came outside to meet with the protesters at around 9:20 a.m. only to say he will formally discuss their demands on Monday with the university provost.

Rainey told about two dozen students that he supports their right to protest and he supports the Black Lives Matter movement, but that the rally was not the time and place to negotiate.

He said students inside were able to leave to get food or use the restroom but were not allowed back inside. To avoid leaving, protesters on the inside peed into diapers, according to social media reports.

Despite the long protest and high tensions, organizers say there is momentum for the fight to abolish the private police company, which maintains jurisdiction over 27 blocks including thousands of people not affiliated with the University, according to #CareNotCops.

“We are at a standstill but the people inside (were) staying as strong as they can," said Roma Linares, an organizer with #CareNotCops. “We have a lot of support from the university community.”

In the wake of George Floyd’s murder and the resulting wave of protests and police violence across the country, the group says university administrators have made both verbal and written statements claiming solidarity with protestors and a commitment to anti-racist action. However, they say they have been completely dismissive of the group demands that they defund “their racist police force," which has a history of racially profiling the student body and surrounding community, the group says.