(WBBM NEWSRADIO) — Compared to Werner Herzog, who once hauled a riverboat up a mountain in South America, nearly everyone has lived a sheltered and cautious life.

But the German-born director found a kindred spirit in Bruce Chatwin, the English writer who explored remote corners of the world.

Herzog — famous for sometimes shooting in exotic and dangerous locales and for his collaborations with mercurial actor Klaus Kinski — met Chatwin in the early 1980s and maintained contact with him until the latter’s death in 1989.

The filmmaker celebrates his friend in a new documentary, Nomad: In the Footsteps of Bruce Chatwin, which is in a theatrical release and available to stream beginning this week. 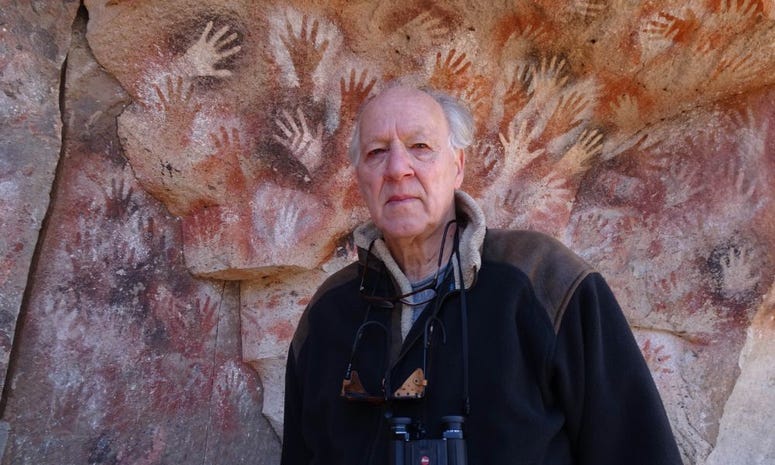 It’s not a straight-up biography, though Herzog offers telling anecdotes. The film is more concerned with some of the cultural concepts Chatwin studied, including "Songlines," the Aboriginal belief that storytelling binds people and landscapes.

WBBM NEWSRADIO: How have you been doing during the pandemic, and how has it changed the way you work and live? I’m assuming your travel has been curtailed?

WERNER HERZOG: I’ve behaved responsibly. I cannot go out and shoot a film, but I just finished a film which was shot last year until December and edited during the lockdown, which will be released on the Apple streaming platform. It’s on meteorites. It’s called Fireball: Visitors from Darker Worlds. I’m writing stories. I’m writing poetry. It doesn’t matter whether I’m locked away.

WBBM: It’s almost paradoxical to watch a documentary about famous travel writer during a pandemic.

HERZOG: I would like to caution, because Bruce Chatwin always hated to be labeled as a "travel writer" and finding his books in the Travel section in the book stores, next to Thailand on Five Dollars a Day.

WBBM: What is the best way to characterize Bruce?

HERZOG: He’s one of the greatest writers of the 20th Century in the English language. There are only a few in his caliber.

HERZOG: Just take my word, and go to the next book store or order by Amazon or wherever. That was always my feeling: If one single viewer of this film would order some of his books and starts reading, I would have won the battle I needed to win.

WBBM: Your friend passed away in 1989. Did you intentionally sit on the project for awhile to let it marinate, or was it just a question of your schedule?

HERZOG: I never planned to make a film of him. Out of the blue, the BBC approached me. I told the BBC people I’m not going to go into a biography, I will do my own film, and of course they spoke about friendship. Yes, but it was a distant friendship. We very sporadically had contact, but it was the same wavelength. It was an instant rapport.

WBBM: You’re throwing a lot of concepts at us in this film, including this idea of nomadism and how early human beings walked as far as they possibly could on the face of the earth. At one point, you sort of lament the idea that nomadism is effectively dead. People have become sedentary and urbanized, and maybe this signals the end of civilization.

HERZOG: I do not lament it. I’m not nostalgic, and we cannnot turn back the wheel of the evolution of human civilized behavior. But we have to face the consequences. And the consequences are that we have become sedentary and that we have a population that is growing way, way too large for our planet. We are in a consumerist attitude, which is particularly devastating for the well-being of our planet.

WBBM: Do you see positives in the state we’re in? In theory, we’re connected to each other. We have the world at our fingertips, via computers and phones. Is this good or bad?

WBBM: Your documentaries are particularly delightful because they’re infused with you. They wouldn’t be the same documentaries without your presence, your narration.

HERZOG: I read you correctly when you say "my presence." It means the kind of discourse I’m having, the commentaries that I write, and the way I speak them. There’s something personal about it.

WBBM: Do you consider these films documentaries, or are they something a little different?

HERZOG: They’re all movies. The line between documentary and feature film is blurred, anyway. Because in documentaries I invent, I rehearse, I cast the right characters, I impose ideas into it that seem to be far-fetched but all of a sudden make a point much clearer.

WBBM: You seem like you keep really busy, for someone who’s turning 78 next month.

HERZOG: So, what? There still may be a good story in me. I'm saying that, and you should understand it as a threat.

WBBM: Roger Ebert and Gene Siskel would review your movies on their show. Here we are 40-some years later, and you’re still going strong, you’re still making movies, you’re doing some acting. Who could have foreseen that you would be in The Mandalorian, which really blew up last year?

HERZOG: I enjoy everything that has to do with cinema, including acting. And you see, I wouldn’t accept the offer to play a part if I didn’t know I would deliver.

WBBM NEWSRADIO: You have a very famous voice. Has anybody ever approached you to do voice-overs for commercial products? Or, have you ever done anything like that?

HERZOG: No, I wouldn't do it. I've had offers. Yes, I do crazy things, like sometimes having a guest part on The Simpsons, which I love. It's a very intelligent series and very anarchic. But I have never made a commercial because I feel very uncomfortable with the world of consumerism. And I do not want to be the spearhead of consumerism, neither with my skills as filmmaker nor with my voice.