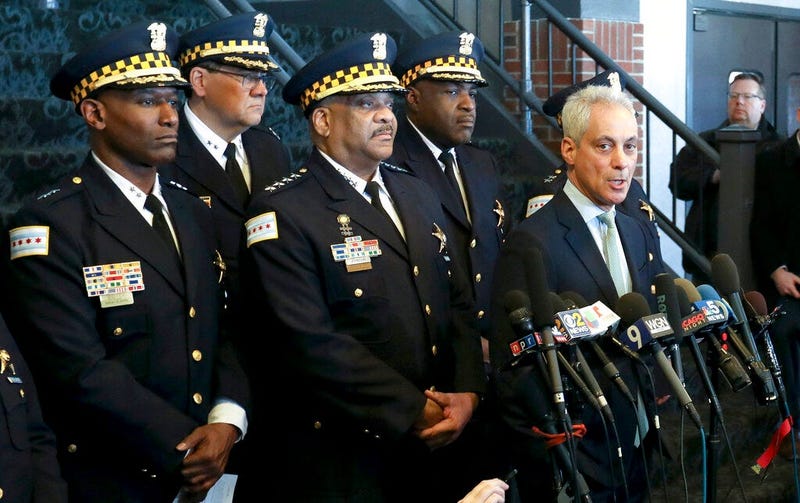 CHICAGO (WBBM NEWSRADIO) -- Despite charges being dropped Tuesday in the Jussie Smollett case, Mayor Rahm Emanuel and other Chicago politicians are looking for ways to make him pay for the time and money spent on the investigation.

State Representative Michael Mcauliffe has a sizable number of police officers in his district. He said police spent a lot of hours investigating "Empire" actor Jussie Smollett's charges and then the charges that he fabricated a hate crime attack to win a bigger paycheck from the TV show he was on.

Rep. Mcauliffe said he plans to introduce a measure that would see the state deny film tax credits to any TV or movie production company that hires Smollett.

Meanwhile, CBS News reports Mayor Emanuel is considering having the city sue Smollett for $150,000 to recoup some of the money spent on the investigation. That is 15 times more than the $10,000 bond Smollett forfeited Tuesday.

"The $10,000 doesn't even come close to what the city spent in resources to actually look over the cameras, gather all the data, gather all the information that actually brought the indictment by the grand jury on many, many multiple charges...not only say the cost of $10,000 doesn't come close financially, but all the other repercussions of this decision made. Where is the accountability in the system?" Emanuel said Tuesday at an afternoon press conference.

"You have the State's Attorney's Office saying he is not exonerated. He actually did commit this hoax. He's saying he is innocent...They better get their story straight. This is actually making a fool of all of us," Emanuel said.

Emanuel said he wants to get to the bottom of the decision. He wants to know how prosecutors decided to dismiss the case after Smollett agreed to forfeit the $10,000 bond he put up and complete "two days" of community service at Operation PUSH.

"How did they make a decision to drop all these charges when he literally is taking the hate crime laws on the books that reflect our values and inverting them to actually self-promote yourself for your own personal enrichment? And then all of a sudden, with nobody's consultation, no discussion of what it would mean, what message it would send, what does it say about the law - you drop it?

"Did he commit this hoax? That is the first question that has to be answered. The second question is, what happened here that allowed the State's Attorney's office, that was in the room with the police department when they actually decided to bring the charges to the grand jury that brought the indictments - what made them all of a sudden say, you know what on second thought, this is enough?" Emanuel said.

Cook County prosecutors defended their decision Tuesday to end the criminal case against actor Jussie Smollett, characterizing it as an “alternative disposition” – not an exoneration.

The Cook County State’s Attorney’s Office said Smollett agreed to do community service and forfeit his $10,000 bond to the city of Chicago. Some 5,700 cases have been referred to these kinds of alternative prosecutions over the past two years, the office said.

"I can't comment as to what he thinks or what he knows," Magats told WBBM Newsradio in one of several interviews he gave Tuesday. "It was not a whitewash of justice. We looked at this case as we would other cases, other disorderly conduct cases, other cases where people have made false police reports to the Chicago Police Department and went from there. To handle it differently, or to not look at it in this vein, would have been to handle it differently than we do in other cases."

What are the city's options now?

“They could sue him civilly,” Miller said. “But they’d have a tough time because he’s still saying ‘I didn’t do anything wrong. You investigated this case, but  I’m a victim. I’m not a bad guy.’ The city is out, chalk it up to experience, but they cannot chalk it up to the fact that there’s no deterrent for other people not to lie to the police department.”