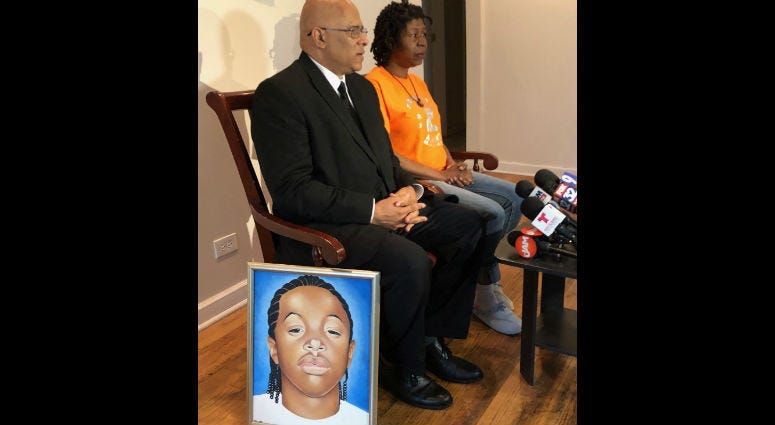 CHICAGO (WBBM NEWSRADIO) -- The mother of Derrion Albert, the Fenger High School honors student who was beaten to death 10 years ago on video, wants to meet with Cook County State's Attorney Kim Foxx and one of the suspects who was freed.

“This is just another step in this journey that I’m on and I’m trying to keep my sanity, I’m trying to have my sanity back. So I think this is something that we need to do,” said Albert's mother, Anjanette Albert, in her South Side apartment where the wall behind her held photos of her son.

The murder captured on cell phone video and broadcast around the world led to four convictions. Dionte Johnson, one of the teens convicted, was 14 at the time and received a suspended sentence of 30 years. After serving time in juvenile detention, Johnson was freed and under the terms if he were to be convicted of another felony would serve the 30-year sentence. He was convicted of a felony in 2016, at the age of 20, for his involvement in a police chase. But the just-elected Foxx declined to pursue the sentence. "I didn’t think justice was done, the justice that we got. If he had gotten out and not gotten in trouble, fine. But he violated, he messed up, and he was supposed to go back to jail,” Albert said.  Albert said she has difficulty every day and has for 10 years. She believes that a meeting with Foxx and one separately with Johnson would help her heal.

Albert sat in her apartment with Tio Hardiman, of Violence Interrupters, who is attempting to facilitate the meetings. Hardiman said it is okay to forgive because that can free you up from resentment and anger.   Albert agreed.

“I don’t think it's as much as forgiving what he did," she said, "It’s for me, so I can have some kind of peace.”And get her sanity back, she said.

WBBM Newsradio reached out to the State's Attorney's Office to see if Kim Foxx is open to such a meeting.