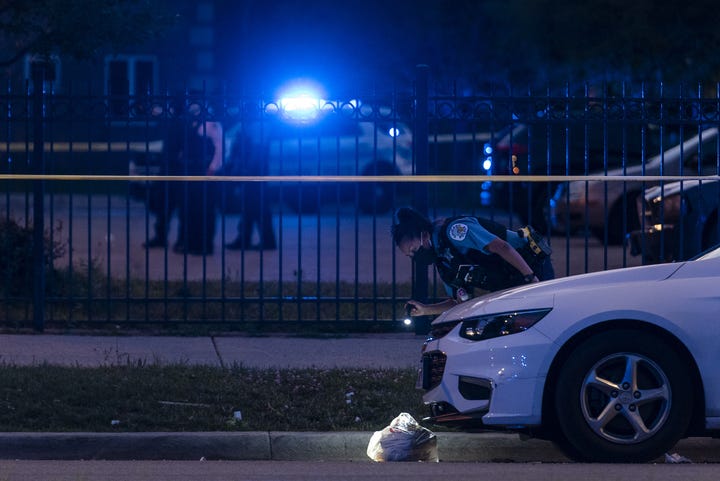 CHICAGO (WBBM NEWSRADIO) -- Six people have been killed and 19 others have been injured in shootings across Chicago since Friday evening.

One teenager is among the dead, while three other teens were wounded.

The latest fatal attack left a woman dead Sunday morning in Englewood on the South Side.

A male suspect followed the 26-year-old woman to a vehicle after an argument and fired shots at her about 4:20 a.m. in the 7500 block of South Emerald Avenue, according to Chicago police. She was hit in the chest and taken to the University of Chicago Medical Center, where she was pronounced dead.

A man was killed Saturday afternoon in Lawndale on the West Side.

Kent Mitchell, 42, was outside shortly after 3 p.m. in the 1500 block of South MIllard Avenue when a group of people walked up and opened fire, striking him in the neck and chest, Chicago police and the Cook County medical examiner’s office said. Mitchell, who lives in Rogers Park, was taken to Mount Sinai Hospital, where he was pronounced dead at 3:27 p.m. On Saturday morning, a woman was killed and a man injured in a shooting in Humboldt Park on the West Side.

They were in a vehicle at 4:19 a.m. in the 3700 block of West Chicago Avenue when a black Chevrolet approached and someone inside started shooting, according to police. Tynaz Shorter, 22, was shot in the right leg and buttocks and taken to Mount Sinai Hospital, where she died, officials said. A 23-year-old man was hit in the right forearm and taken to Stroger Hospital in good condition.

Two people were shot, one fatally, earlier Saturday morning in Chatham on the South Side.

Aaron Campbell, 30, and a 26-year-old woman were in a parked vehicle shortly after midnight in the 8000 block of South Ingleside Avenue when two males approached and fired multiple shots, authorities said. Campbell was shot nine times and taken to the University of Chicago Medical Center, where he died. The woman was taken to the same hospital in good condition with a gunshot wound to the buttocks.

Another man was fatally shot late Friday night in Dunning on the Northwest Side.

Ramon Flores Jr., 42, went outside to smoke about 11:50 p.m. in the 6700 block of West Belmont Avenue when two males approached and began shooting at him, officials said. Flores, who lived in Orlando, Florida, was shot in the back and taken to Loyola University Medical Center in Maywood, where he died.

About an hour earlier, one teenager was fatally shot and another injured in Lawndale on the West Side.

Officers found the two boys shot in a stairway about 10:50 p.m. Friday in the 3600 block of West Douglas Boulevard, police said. Antwon Winters, 14, suffered a gunshot wound to the chest and was taken to Stroger Hospital, where he was pronounced dead. The other boy, 15, was shot in the right leg and was taken to Stroger Hospital in good condition.

In nonfatal shootings, a teenage girl was among two people wounded Saturday afternoon in Grand Crossing on the South Side.

The girl was with another female about 5:15 p.m. in the 7500 block of South Dorchester Avenue when shots were fired from somewhere, striking both of them, police said. The other female, whose age is not known, was struck in the head and back, and taken to the University of Chicago Medical Center in critical condition. The 17-year-old was taken to the same hospital in good condition with a gunshot wound to the knee.

Earlier in the afternoon, three men were wounded in a shooting in Calumet Heights on the South Side.

Someone in a vehicle fired shots at the trio about 3:20 p.m. in the 1900 block of East 95th Street, police said. A 27-year-old man was struck several times in the body and taken to the University of Chicago Medical Center in critical condition. Another man, 40, was taken to the same hospital in serious condition with a gunshot wound to his back. A third man, who is in his 30s, was struck multiple times in the body and taken to Christ Medical Center in Oak Lawn in serious condition.

Saturday morning, a 17-year-old boy was shot while driving in Bucktown on the North Side.

He was riding in a vehicle about 12:30 a.m. in the 2200 block of West Diversey Avenue when he heard gunshots and realized he was hit, according to Chicago police. He was taken to Stroger Hospital in good condition with a gunshot wound to the buttocks, police said.

The weekend’s first reported shooting left a man wounded in Austin on the West Side.

A 22-year-old man was shot in the groin about 6:06 p.m. in the 5100 block of West Ohio Street, police said. He was taken in stable condition to Mount Sinai Hospital.

Nine more people have been wounded in citywide shootings since 5 p.m. Friday.