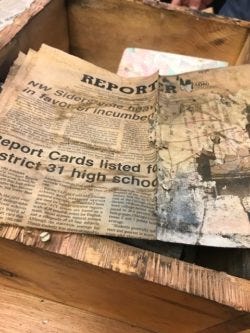 (WBBM NEWSRADIO) — ComEd has discovered a time capsule that was placed in the walls of its old building at 3500 N. California to mark the company’s 100th anniversary.

Inside: newspapers, magazines, books and things considered state-of-the-art in 1987.

Our first thought: 1987 doesn’t seem all that long ago.

“It doesn’t, I know!” agreed John Maxson, a ComEd retiree. He placed the time capsule in its spot.

“Here’s the most impressive thing about it to me: At that time, we placed the time capsule with the idea that it would be found many, many years from now,” he said.

“We didn’t know how many, but we just thought the building was like the Pyramids or something. You don’t ever think about at coming down.”

Maxson pondered the considerable advances that have occurred in the past 33 years.

“When we put that box in there, thinking we were a high-tech company and moving forward and using every resource we had, there was no Internet,” he noted. “No GPS. None of the software that the company uses now that’s very sophisticated for switching loads and all that sort of thing.”

Maxson says he hopes Com Ed will put the box in the company archives.

Also found with the time capsule: a bas relief eagle from 1930, saved from a previous demolition.