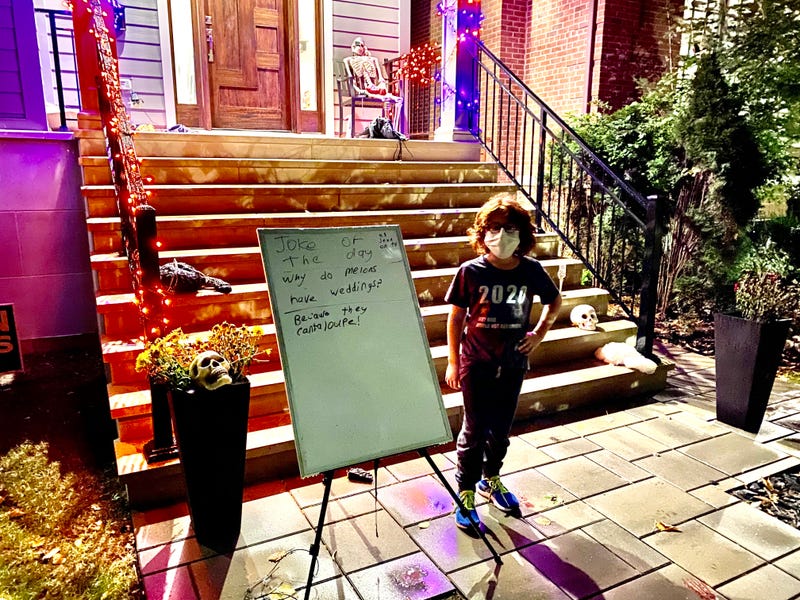 CHICAGO (WBBM NEWSRADIO) -- Need a reason to smile? Take a walk in Lincoln Square, on the sunny side of the street.

There’s a house in the 2100 block of Sunnyside where a 10-year-old boy named Asher has a whiteboard on the front lawn. Every day he posts a new joke of the day.

His father Russ Horowitz says Asher back in March said he wanted to post a joke outside.

“And we’re like, ‘Sure!’ And then it became a we-gotta-get-the-joke-out thing,” he told WBBM Newsradio’s Steve Miller on Wednesday.

“I really like the first one I did,” Asher said. “‘To the guy who invented zero: Thanks for nothing.’”

The fifth-grader posts a new joke before he goes to school every morning. He has had no shortage of favorites, like, “I went to an interview. They asked if I could perform under pressure. I said no, but maybe ‘Bohemian Rhapsody.’”

Russ Horowitz says the daily joke has meant something to people who pass by.

“For some people who come by, it’s part of their day,” he said. “We have some friends who live in the neighborhood, and they’re like, every morning, come by, joke of the day.”

Asher says people have thanked him.

“I’ve been getting letters, under the board, in the mailbox, just saying thank you so much, it brings a smile, keep it coming.”

The joke when WBBM Newsradio visited was this: “My daughter is terrified of elevators. So we are going to start taking steps to avoid them.”