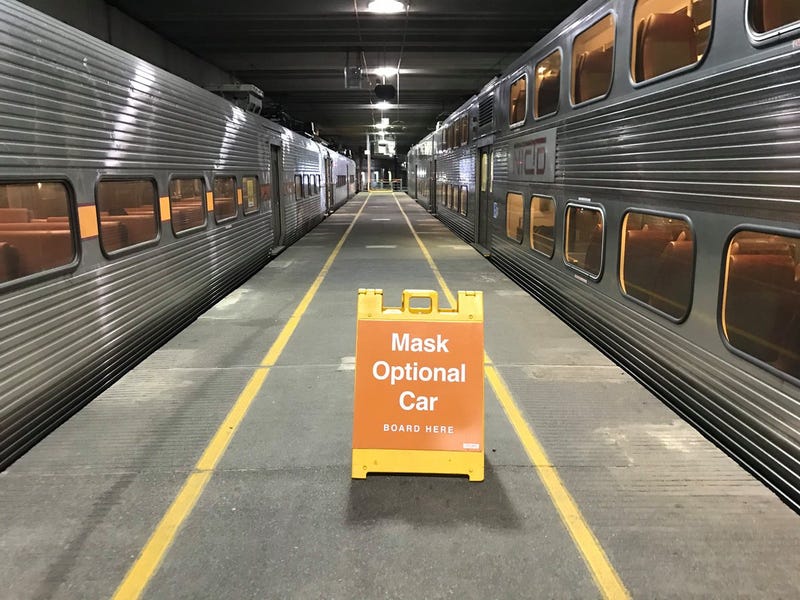 CHICAGO (WBBM NEWSRADIO) -- A local transportation blog featured an item about the South Shore train line offering passengers a “mask-optional car” and a lot of people with strong opinions weighed in on the issue.

The South Shore Line, operated by the Northern Indiana Commuter Transportation District, started offering a mask-optional car in June, despite a statewide mask mandate and similar orders in some counties the trains serve, including LaPorte and Lake.

“We were getting complaints from riders, telling us that others in their car weren’t wearing masks,” President Michael Noland said. “Because we had enforcement problems, we went with this approach.”

After Streetsblog Chicago posted a picture of a “mask-optional car” sign the reaction was almost universal.

Do any other U.S. cities have commuter railroads like the @southshoreline from Chicago to South Bend, IN, that are coddling COVID deniers? pic.twitter.com/0FRJKjRZ1O

One person wrote, “Really smart. The policy keeps fools together and allows train personnel to avoid conflicts with crazies."

Another wrote, “This is great. Let those idiots have their higher chance of infection.”

One said it seems like a good compromise. Another wrote, "What. the. F***."

Still another wrote, "It’s a shame it’s not branded the 'Darwin' car."

Streetsblog noted the mask-optional car its writer was on recently was the one that also allows bikes, saying it seemed pretty ironic cyclists were being encouraged to share an enclosed space and breath the same air as folks who are refusing to follow public health protocols.

Employees on the train service are still required to wear masks, and passengers not in the “mask-optional” car must also wear them.

Noland told Streetsblog Chicago the complaints for non-compliance have gone down since the mask-optional cars were added.

“It’s not a perfect policy, but we think it’s worked very well because we had a lot of concerned customers,” he said. “We are not encouraging them not to wear a mask, and we are advising them that there are mask requirements that they need to be aware of.”