A Little Free Library in Carol Stream has been torched, and the village’s library director says she hopes it will be rebuilt.

The call came in from a library patron, letting Carol Stream Library Director Susan Westgate know that someone had set fire to the Little Free Library near a hiking path by the water treatment plant.

She says the village library donated several boxes of books to the book box when it was put up about two years ago.

“This was done to contribute, to enrich to the community. To have someone deface something and try to destroy it — it really almost defies logic and reason, at least for me,” Westgate said Tuesday.

A photo of the vandalism was posted to Facebook Tuesday. 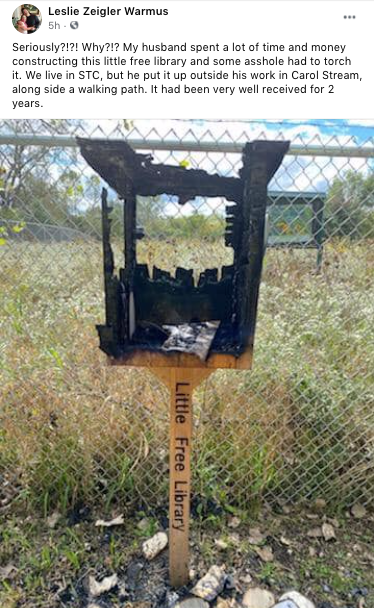 Westgate says she called the men at the water treatment plant who helped organize the Little Free Library to tell them it had been destroyed by fire.

“And I could just feel it over the phone, the disappointment and sadness,” she says.

“I hope they rebuild it. We’d be happy to restock it for them.”

Little Free Libraries are a network of book-sharing boxes across the world. A centralized not-for-profit tries to keep track of the literacy outposts, but some people create their own "rogue" versions.