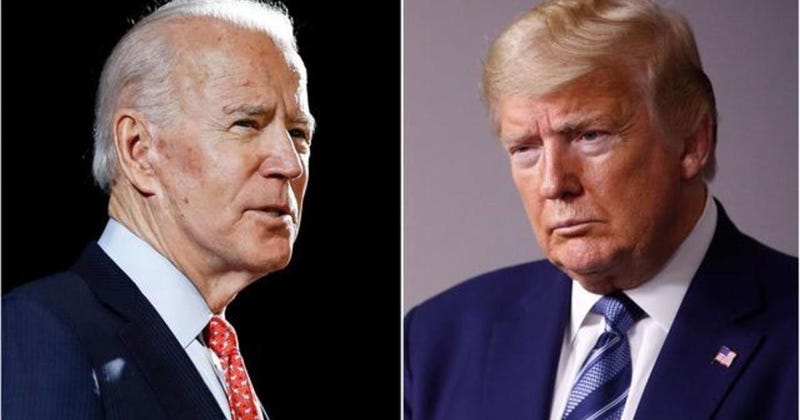 CHICAGO (WBBM NEWSRADIO) -- The Trump and Biden campaigns are raising questions about whether the other is fit enough to be president, but a new report said they’re both likely to be healthy through the next term.

In a paper published in the Journal on Active Aging, University of Illinois Chicago longevity researcher S. Jay Olshansky and his colleagues conclude that both 2020 presidential candidates — former Vice President Joe Biden, 77, and President Donald Trump, 74 — are likely to maintain their health beyond the end of the next presidential term.

As a result, they say that chronological age and fitness should not be factors in the 2020 election.

“It is our conclusion that chronological age is not a relevant factor for either candidate running for President of the United States,” the authors wrote. “Both candidates face a lower than average risk of experiencing significant health or cognitive functioning challenges during the next four years.”

It won’t be clear until they’re 80, but Olshansky and other longevity experts wrote that Biden and Trump appear to be part of a subgroup that maintains their mental and physical functioning and tends to live longer.

To evaluate each candidate’s likelihood of surviving a four-year term in office, the researchers scientifically evaluated the candidates’ health status based on publicly available medical records and confirmed publicly available personal information. The medical records of each candidate were independently evaluated by three medical doctors with experience in aging and a team of research scientists with expertise in epidemiology, public health, survival analysis, and statistics.

The study found both Biden and Trump are likely to be “super-agers,” a subgroup of people that maintain their mental and physical functioning and tend to live longer than the average person their age.

Biden is expected to outlive Trump, even though he is three years older. In the paper, the researchers note Biden’s “nearly perfect health profile for a man his age,” compared with Trump’s “significant but modifiable” risk factors.

While Trump is noted to have an elevated familial risk of late-onset Alzheimer’s disease, neither candidate is expected to have major cognitive functioning challenges now or during the next four years, the study found.

Olshansky said the results are evidence that age does not matter in this historic election in which the next elected president will be the oldest in American history.

“We see chronological age as a topic of discussion time and again during elections, even though scientific and medical evidence tells us that biological age is far more important,” Olshansky said.

Biological age is reflective of how rapidly a body is growing old — this occurs at different rates, Olshansky said.

The team estimates Biden will live to be 96 and Trump to be 88.