Laura made landfall in southwestern Louisiana at 1:00 AM(CT) near Cameron, Louisiana as a category 4 hurricane.

As of 6am, Laura's winds have dropped, but are still showing 105mph. The hurricane is located 55 miles north of Lake Charles Louisiana. Movement is north at 15mph.

At 1 am CDT, Hurricane #Laura has made landfall in southwestern Louisiana near Cameron as a category 4 #hurricane. Maximum sustained winds were 150 mph, with a minimum central pressure of 938 mb. Potentially catastrophic impacts will continue. More: https://t.co/tW4KeFW0gB pic.twitter.com/GVWRnmGejy

Laura made landfall in southwestern Louisiana at 1:00 am near Cameron, Louisiana as a category 4 hurricane.

DFW will feel very little impact from Laura as it passes to our East tomorrow afternoon. We will get some breezy conditions and possibly 1 or 2 outer bands as it makes its way into Arkansas late tomorrow into early Friday. 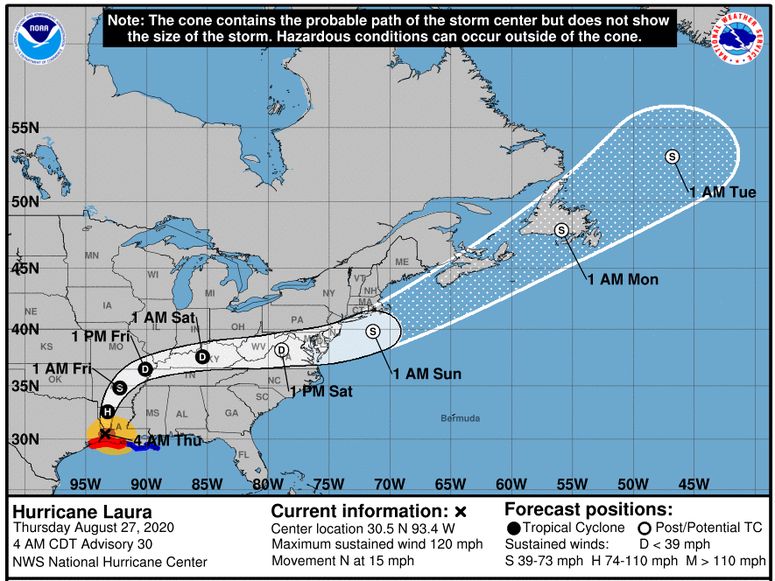 The hurricane is now moving northward with the initial motion estimated to be 355/13 kt. Laura is expected to continue moving northward through tonight, which should take the core of the system across Louisiana and Arkansas.

After that, Laura will likely become embedded in the mid-latitude westerlies, and the much weaker cyclone is forecast to move quickly east-northeastward across the southeast U.S. and the mid-Atlantic states on Friday and Saturday.  By late in the weekend and early next week, Laura, or its extratropical remnants, should accelerate northeastward across the western Atlantic.

Now that Laura is inland, rapid weakening is forecast and it will likely become a tropical storm later today and a tropical depression on Friday. It should be noted that strong hurricanes like Laura are not just coastal events. Even though Laura's highest winds will decrease quickly as it treks inland, significant impacts from heavy rains and strong wind gusts are likely through at least tonight across portions of Louisiana and Arkansas. Some strengthening as an extratropical cyclone is expected when the storm moves over the Atlantic waters late this weekend and early next week.

It does look like Laura is starting to take that turn to the North now. Landfall around 3:00 a.m. along the Texas/Louisiana border. Could be a Cat 5. Only four category 5 hurricanes have ever hit the US mainland.

Here are a couple of interesting facts:

If Laura makes landfall in Texas, it is currently the 8th strongest based on lowest central pressure to hit Texas since 1957 and only the 4th Cat. 4 since 1957 to hit Texas, if it indeed stays on the TX side of the TX/LA border.

DFW will feel very little impact from Laura as it passes to our East tomorrow afternoon. We will get some breezy conditions and possibly 1 or 2 outer bands as it makes its way into Arkansas late tomorrow into early Friday. 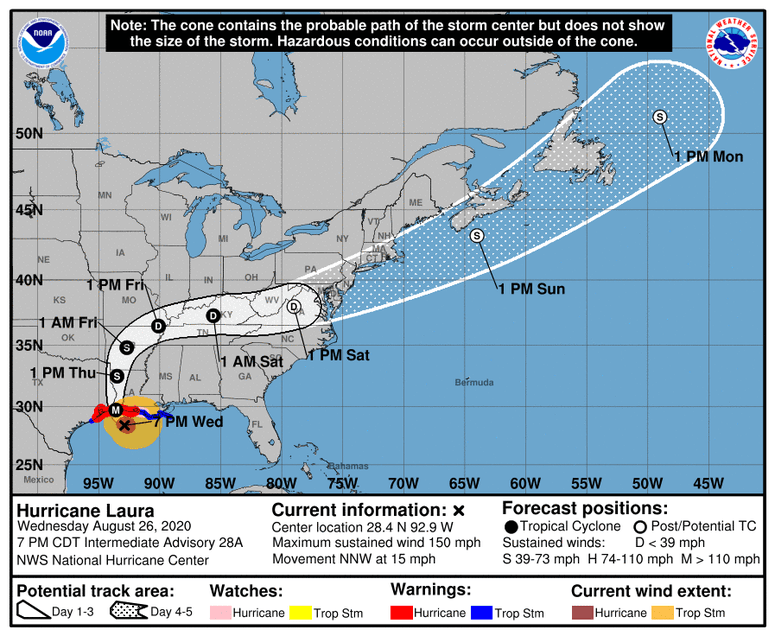 This is a very dangerous and serious situation setting up for the Texas/Louisiana border area. Please make sure your family and friends are monitoring this dangerous storm and heeding evacuation orders as it approaches the coastline tonight into early Thursday morning.

Unsurvivable storm surge with large and destructive waves will cause catastrophic damage from Sea Rim State Park, Texas, to Intracoastal City, Louisiana, including Calcasieu and Sabine Lakes. This surge could penetrate up to 30 miles inland from the immediate coastline. #Laura pic.twitter.com/bV4jzT3Chd