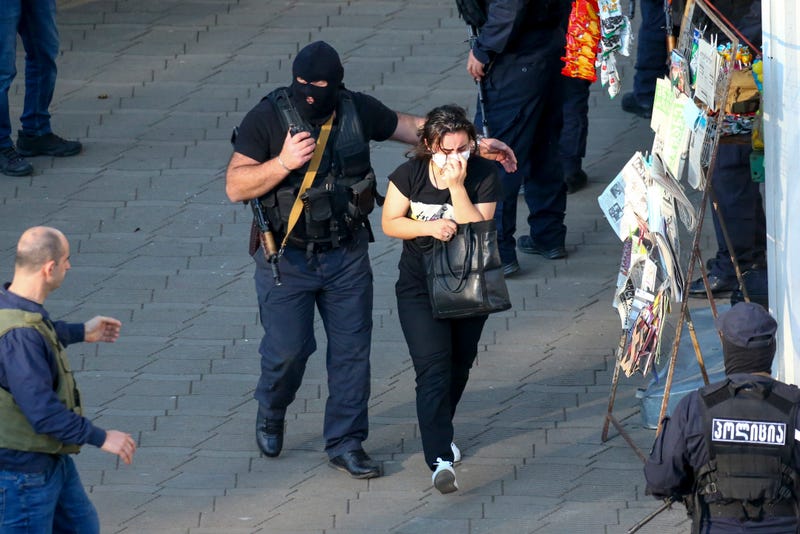 TBILISI, Georgia (AP) — Police in the ex-Soviet nation of Georgia said 43 people were freed after an armed assailant took them hostage in a bank Wednesday, an announcement that came shortly after local media reported the gunman escaped and remained at large still holding three hostages.

An armed man took bank employees and customers hostage in the town of Zugdidi in western Georgia. The Georgian Interior Ministry didn't comment on how many people were taken hostage or what demands the hostage-taker made, but local media the assailant had demanded $500,000 in cash.

Georgia’s national Mtavari TV channel reported the captor was armed with a hand grenade and aired footage of a room with people sitting on the floor and a man dressed in a military uniform and covering his face while holding a rifle.

On Wednesday evening, several Georgian TV channels said the assailant left the building taking three hostages with him and his whereabouts were unknown. Two TV channels aired footage of the alleged captor coming out of the building with three men in front of him.

Reports said one of the three hostages apparently still being held might have been a local police chief who took part in negotiations with the gunman.

In a statement early Thursday, the ministry said that the 43 freed hostages have been “transferred to a safe area” and that the police operation continued, but didn't comment on reports about the assailant leaving the building with three hostages.