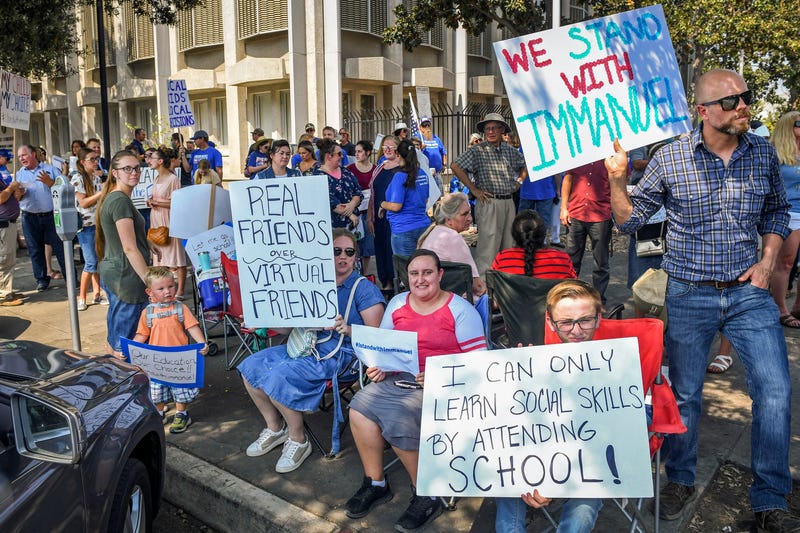 SAN FRANCISCO — A California private school has been ordered to pay $15,000 for defying a judge’s order to close classrooms and stop in-person teaching.

It may be the first judgment of its kind against a California school for violating health orders aimed at slowing the spread of the coronavirus.

— Federal judge considers challenge to CDC order halting evictions of certain renters through the end of year to prevent the spread of the coronavirus.

BOISE, Idaho — Idaho is seeing its largest coronavirus spike since the pandemic began, with the number of new cases increasing 46.5% over the past two weeks.

That has some health care experts urging Gov. Brad Little to take additional action to slow the spread of the virus.

The governor has said the responsibility for efforts to slow the virus falls on individuals. He urges people to wear masks, practice social distancing and wash their hands.

Gov. Jared Polis said Tuesday that he will instead encourage the people of Colorado to take responsibility for mask wearing, social distancing, getting tested, self-quarantining and other behaviors to stem the virus’s spread.

Polis says roughly 80% of the pandemic fight comes down to personal decisions. He also says local health agencies are best suited to deal with any rising cases among their residents.

SEATTLE — Washington state Gov. Jay Inslee is requiring colleges and universities to provide quarantine facilities for all students if they are exposed to the coronavirus.

The governor on Tuesday issued more restrictions for higher education campuses as the University of Washington struggles to contain an outbreak in its fraternities and sororities. There also have been outbreaks in Whitman County, home of Washington State University.

The new guidelines require colleges to provide isolation and quarantine facilities for Greek system houses, communal off-campus homes, students living in dorms and other personnel if they don’t have a place to go. Colleges without dorms or residential facilities will have to devise plans for addressing student and staff needs for isolation and quarantine in the event of exposure.

ANN ARBOR, Mich. — Students at the University of Michigan are being ordered to stay in place for two weeks after a surge of coronavirus cases driven by social gatherings on and off campus.

Local health officials said Tuesday that the surge is overwhelming their ability to confront the pandemic. Officials say coronavirus cases related to the university represent 61% of the total in Washtenaw County, compared to just 2% in August.

More than 1,000 students have been infected since the start of fall term despite limits on gatherings and classes that are mostly held online. Undergraduate students can attend in-person classes and also leave their residences for exercise, work, food, medical appointments, voting and religious services.

In response to the order, university President Mark Schlissel says even more undergraduate classes will shift to remote instruction. Students who want to leave campus housing for the balance of the term could receive a refund or credit.

NEW YORK — A new study shows that older workers are facing higher unemployment than midcareer workers amid the coronavirus pandemic.

The study released Tuesday from researchers with the New School university in New York City found that workers 55 and older lost jobs sooner, were rehired slower and continue to face higher job losses than their counterparts ages 35 to 54.

The researchers say that from April through September, the older workers’ unemployment rate was 9.7% compared to 8.6% for midcareer workers. That’s based on a six-month rolling average.

The study says the rate was far worse for older workers who are black, female or lack college degrees.

NEW YORK — A new government report shows that since the coronavirus pandemic began, the U.S. has seen 300,000 more deaths than it usually would.

The Centers for Disease Control and Prevention has been tracking how many deaths have been reported and comparing them with counts seen in other years. Usually, between the beginning of February and the end of September, about 1.9 million deaths are reported. This year, it’s closer to 2.2 million – a 14.5% increase.

The CDC says the coronavirus was involved in about two-thirds of the excess deaths. CDC officials say it’s likely the virus was a factor in many other deaths too. For example, someone with heart attack symptoms may have hesitated to go to a hospital that was busy with coronavirus patients.

Deaths were up for different racial and ethnic groups, but the largest increase – 54% – was among Hispanic Americans.

Savage was dismissive of criticism of the event Monday: “I guess we’ll have to call it a ‘peaceful protest.’ Gov. Mills and her pals should be fine then,” Savage said in an e-mail.

ATLANTA — The CDC is strongly recommending passengers on planes, trains and buses wear masks, but it’s stopping short of requiring it.

The CDC says the coronavirus is still being transmitted in the U.S. and internationally through travel. Those travelers are often in close contact with others, sometimes for several hours. Masks are necessary because travelers may be unable to stay 6 feet apart on planes and buses, CDC says.

It says masks should be worn by all passengers and workers on planes, ferries, trains, subways, buses, taxis and ride-sharing vehicles.

That includes in airports and at subway and bus stations. All leading U.S. airlines require passengers other than small children to wear masks during flights, but enforcement can be spotty. The Federal Aviation Administration has declined to require masks.

The CDC says it was offering the new recommendations to support state and local health officials and transportation operators who have imposed their own mask rules.

PHOENIX — Arizona reported more than 1,000 daily coronavirus cases for the second time in a week.

The state’s rolling average of daily new cases rose over the past two weeks from 508.6 new cases on Oct. 5 to 835.3 on Oct. 19, according to Johns Hopkins University data analyzed by The Associated Press.

Arizona was a national hotspot in July and July.

OKLAHOMA CITY — The number of people hospitalized in Oklahoma with the coronavirus reached a record high 821.

The number reported by the Oklahoma State Department of Health on Tuesday is 28 more than the previous record of 793 recorded on Friday.

Gov. Kevin Stitt plans to discuss hospital capacity in the state. The health department reported an additional 1,475 cases and 18 deaths.

“It would be very difficult to adequately respond to continued sudden spikes in infections because our human resources are limited,” says Goran Cerkez, the assistant health minister in the larger of the country’s two autonomous parts.

Over the past seven days, there’s been an average of 506 cases per day registered in Bosnia, an increase of more than 40% from the average a week earlier. At the same time, several hospitals around the country say their COVID-19 wings are filling up.

LONDON — British Prime Minister Boris Johnson says he’ll impose the highest level of coronavirus restrictions on the Greater Manchester region, after no deal was reached on a financial package.

Johnson says action was needed to protect the lives of Manchester’s residents and the region’s health care system. The Tier 3 measures mean pubs and businesses must close and people in England’s second-largest city are banned from socializing with other households.

Leaders of the Greater Manchester region have resisted the tough restrictions for days, saying local businesses forced to close would need more financial support from the government.

Mayor Andy Burnham says he asked for an aid package, but the government walked away from the talks.

MADRID — Spain is poised to become the first country in Europe to surpass the milestone of 1 million officially recorded cases of the new coronavirus.

At the current rate of infection, Spain is likely to exceed 1 million on Wednesday.

Health experts say the true number of infections is probably much higher. That’s because insufficient testing, asymptomatic cases and other issues mean official counts fail to capture the real scale of the outbreak.

Spain has confirmed 34,210 deaths from the coronavirus.

COLUMBUS, Ohio — The number of people hospitalized in Ohio because of the coronavirus has reached 1,154, the department of health reported.

The agency says that’s the highest since July, with 158 on ventilators.

The Health Department reported 1,837 confirmed virus cases on Monday, above the 21-day case average of 1,515.

WASHINGTON — A new poll finds Americans’ trust in the people and institutions giving them information about the coronavirus has fallen across the board.

Nearly two-thirds of Americans say they don’t trust President Donald Trump much or at all for accurate coronavirus information. That’s according to a poll by USAFacts and The Associated Press-NORC Center for Public Affairs Research.

The poll finds that the percentage of people saying they trust COVID-19 information from their state or local governments, the news media, social media and their friends and family has dropped significantly compared to similar questions in April. After Trump, the poll shows only social media has higher distrust levels.

The poll also shows a large chunk of Americans find it hard to know if COVID-19 information is accurate.