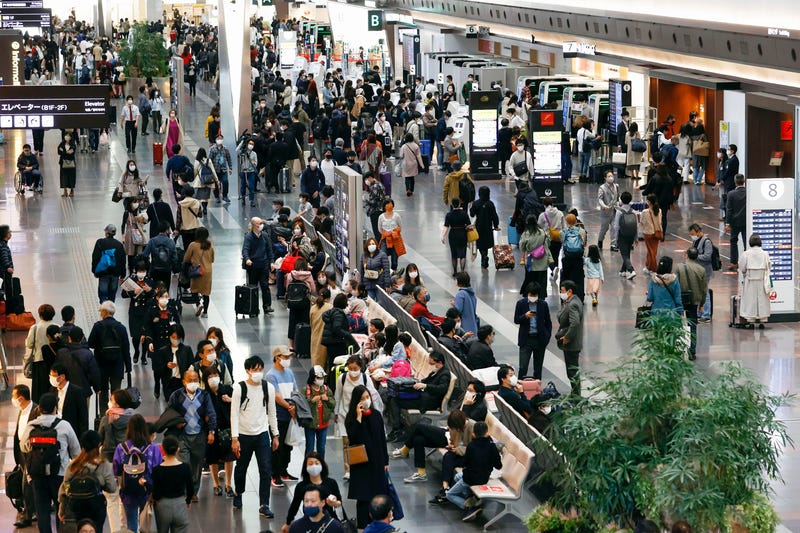 TOKYO — The daily tally of reported COVID-19 cases in Japan hit a record for the fourth day in a row, with 2,508 people confirmed infected, the health ministry said Sunday.

Japan has had fewer than 2,000 coronavirus-related deaths so far, avoiding the toll of the harder hit nations. But fears are growing about another surge. A flurry of criticism has erupted, from opposition legislators and the public, slamming the government as having acted too slowly in halting its “GoTo” campaign, which encouraged travel and dining out with discounts.

Prime Minister Yoshihide Suga announced the decision Saturday. But many people had already made travel reservations for this three-day Thanksgiving weekend in Japan.

Airports and restaurants have been packed. Some said the government should have offered to pay for cancellations, or stepped up more on PCR testing instead, if the goal is to keep the economy going amid a pandemic. Tutorials are circulating online on the proper way to eat and drink at restaurants, while wearing masks.

— Los Angeles County businesses trying to recover from the coronavirus pandemic face new restrictions and the prospect of a shutdown on the horizon.

EL PASO, Texas -- The Texas National Guard has sent a 36-member team to El Paso to assist morgues in the border region with the number of dead as a result of COVID-19, the illness caused by the coronavirus.

Statewide, the Texas health department on Saturday reported a one-day high of 12,597 new virus cases, nearly 20,500 dead since the pandemic began and more than 8,200 virus hospitalizations.

“The Texas Military will provide us with the critical personnel to carry out our fatality management plan and we are very grateful to them for their ongoing support,” El Paso Mayor Dee Margo said late Friday when the deployment was announced.

The pandemic is blamed for 853 deaths in El Paso County, including more than 300 since October. Jail inmates are being paid to move bodies and county leaders are offering $27 an hour for morgue workers.

County Judge Ricardo Samaniego, in a letter to Gov. Greg Abbott asking for support for a 10 p.m.-5 a.m. curfew in the county, said mortuaries are being overwhelmed. He wrote that the local medical examiner’s office reported that 234 bodies were being held at the main morgue and nine mobile morgues.

WILMINGTON, Delaware — President-elect Joe Biden says all Americans should be able to attend religious services during the pandemic — as long as they do so safely.

Biden made the statement in response to a reporter’s shouted question as he was walking out of church Saturday evening in Delaware.

Specifically, Biden was asked whether all Americans should be able to attend religious services during the pandemic.

He did not answer a follow up question about whether indoor services should be allowed.

Some in-person church services across America have been closed as state leaders grapple with social distancing safeguards as the pandemic surges.

PORTLAND, Ore. -- Oregon has reported a record number of coronavirus cases for the second day in a row.

On Saturday, the Oregon Health Authority said there were 1,509 new confirmed cases of COVID-19 infections, spread across all but four of the state’s 36 counties, with the majority in the Portland metro area.

Among the seven new deaths being reported Saturday, all were in their 70s or 80s, and either had or were suspected of having underlying health conditions.

The state’s total is now 63,668 confirmed coronavirus infections and 819 deaths.

BALTIMORE — More than 12 million people in the U.S have contracted the coronavirus since the start of the pandemic.

The nation’s total number of confirmed cases reached 12.01 million on Saturday, six days after the number had reached 11 million, according to a tally by Johns Hopkins University.

Daily numbers of new U.S. cases are approaching 200,000, less than three weeks after hitting 100,000 for the first time. The record of 195,542 new cases on Friday was the latest of several recent daily highs.

Deaths rates are getting closer to the dire numbers seen in the spring. The U.S. daily death toll exceeded 2,000 on Thursday, the first time since early May. On Friday, 1,878 deaths were reported.

The government recently put the majority of Italy’s regions under new restrictions, including banning dining at cafes and restaurants in areas where the health care system risked collapse.

TOPEKA, Kan. — Kansas will launch a media campaign to encourage more of its residents to wear masks.

The campaign comes months after the state’s Republican-controlled Legislature forced Democratic Gov. Laura Kelly to accept that local officials would set pandemic restrictions. Kelly issued two mandates for people to wear masks in public, including one set to take effect Wednesday, but a law enacted in June allows each of the state’s 105 counties to opt out.

The state has set aside $1.5 million of its federal coronavirus relief funds for television, radio, print and social media ads promoting masks that are set to start before Thanksgiving and run through January or longer.

Kansas added an average of 2,718 per day over the seven-day period that ended Friday, with the state reaching a confirmed total of more than 134,000 cases. There’s been more than 1,400 confirmed deaths.

HARRISBURG, Pa. — The Pennsylvania Department of Health reported Saturday there were 3,162 people hospitalized with coronavirus, the most since May.

A total of 661 coronavirus patients were in intensive care units. The trend in the 14-day rolling average of hospitalized patients per day had increased by nearly 1,900 since the end of September, the department says.

Officials noted again that most of the hospitalized patients and deaths occurred among those 65 or older.

NEW YORK — The Rockefeller Center ice-skating rink is opening in a limited way and on time for the holidays.

The iconic, sunken rink in midtown Manhattan is welcoming skaters Saturday as part of a tradition dating to the 1930s, according to the Rockefeller Center website. The rink is operating at reduced capacity, with skate time limited to 50 minutes. Masks are required.

A spokesman for the younger Trump says he received the positive test result earlier this week, has no symptoms and has been quarantining and following the recommended medical guidelines.

President Trump tweeted Saturday that his son “is doing very well.” Trump Jr. is the latest member of the president’s family to become infected, after the president, first lady and their son Barron.

PIERRE, South Dakota — Coronavirus infections are ravaging South Dakota, where more than half of tests have come back positive for weeks.

Some governors who for months echoed President Donald Trump’s criticism of measures to control the coronavirus are now relenting, including North Dakota Gov. Doug Burgum, who recently ordered the use of masks statewide.

Republican and Democratic governors from several Midwestern states issued a joint video urging people to say home for Thanksgiving and wear masks to slow the spread of the virus until a vaccine is widely available.

Hospitals in many states are running out of beds and are short on nurses, including in the states where governors are reluctant to act.

“We know what will happen. We know that three to four weeks from Thanksgiving, we will see an exacerbation of the outbreaks,” said Dr. Georges Benjamin, executive director of the American Public Health Association.

CDC scientists believe about 40% of infected people don’t have obvious symptoms but can still spread the virus.

TALLAHASSEE, Florida — The game between No. 4 Clemson and Florida State has been postponed just hours before kickoff on Saturday. Medical personnel from both schools couldn’t agree it was safe to play in Tallahassee, Florida, amid the pandemic. The Atlantic Coast Conference announced the postponement, although it didn’t detail whether it involved coronavirus issues.

Star Clemson quarterback Trevor Lawrence missed the past two games after testing positive for the coronavirus. He was to return for his first time since Oct. 24.

There have been 18 postponements this week out of 62 scheduled games. It is the 81st postponement in all of college football this season. It’s believed to be the first postponement on game day.

SACRAMENTO, Calif. — One of Gov. Gavin Newsom’s children may have been exposed to the coronavirus at school and is in quarantine.

The child began a 14-day quarantine “from the date of exposure” after the family was told a classmate at the private school had tested positive for the coronavirus, spokesman Nathan Click said in an emailed statement Friday.

The rest of the governor’s family is not quarantining because they weren’t directly exposed. The governor, his wife and all four of their children have tested negative for the virus, Click says.

The new restrictions say people should stay home from 10 p.m. to 5 a.m., except for essential errands. The curfew runs through Dec. 21 and covers 41 counties that contain most of the state’s population.

Authorities say the focus is on keeping people from social mixing and drinking — the kinds of activities blamed for causing coronavirus infections to soar after dipping only a few months ago.

Los Angeles County, the state’s largest with about 10 million people, could see a stricter lockdown as early as next week because of soaring cases and hospitalization levels. The county accounts for a quarter of the state’s 40 million residents, but it has about a third of the coronavirus cases and close to 40% of the deaths.

TEHRAN, Iran — Iran has shuttered businesses and curtailed travel between its major cities, including the capital of Tehran.

The Iranian Health Ministry says the daily deaths have risen above 430 in the past five days, bringing the death toll past 44,000. The total number of confirmed cases has risen past 840,000.

The new restrictions include Iran’s major cities and will last two weeks but can be automatically extended.

All schools in the capital will close and switch to remote learning. Authorities will close shrines in Tehran and cancel mass prayers in mosques, though it was not immediately clear if the same restrictions would apply in other cities, including the holy city of Mashhad.

MOSCOW — Russia reported new daily highs in the number of coronavirus infections and deaths on Saturday.

The national coronavirus taskforce says 24,822 new cases were recorded over the past day, the fourth time in a week that a new high has been tallied. It says a record 467 people died of COVID-19.

The surge in infections is straining Russia’s vast but underfunded health care system, with many infected people reportedly forced to search for sparse hospital beds.

TOKYO — Japan is scaling back on the government-backed “GoTo” campaign to encourage travel and dining out, as the number of confirmed coronavirus cases reached a record for the third day straight at 2,418.

Stressing the need for “utmost caution,” he says the campaign’s travel discounts will no longer apply to hard-hit areas and discounts on eating out will temporarily end.

Japan has never had a total lockdown. It has had fewer than 2,000 confirmed deaths related to the coronavirus. But worries have been growing about a spike in infections over the three-day weekend. Monday is Labor Thanksgiving, a national holiday.

NEW DELHI — India has reported 46,232 new confirmed coronavirus cases in the past 24 hours, with the situation particularly alarming in New Delhi.

Intensive care wards and the capital’s main crematorium are near capacity, and health officials this week found the prevalence of infections in markets much higher than expected. The city has added an average of 6,700 cases each day in recent weeks.

The next two weeks in the post-festival season, including celebrations for the Diwali holiday, are going to be important in determining which way the virus will go. The Health Ministry on Saturday also registered 564 deaths in the past 24 hours, taking total confirmed deaths to 132,726.

While the pace of new cases in the country of 1.3 billion appears to be slowing, experts have cautioned that official figures may be offering false hope since many infections are undetected.

The two states of Madhya Pradesh and Gujarat have announced night curfews in at least in eight cities from Saturday. Northern Rajasthan state is also imposing restrictions on the assembly of more than four people during nighttime.