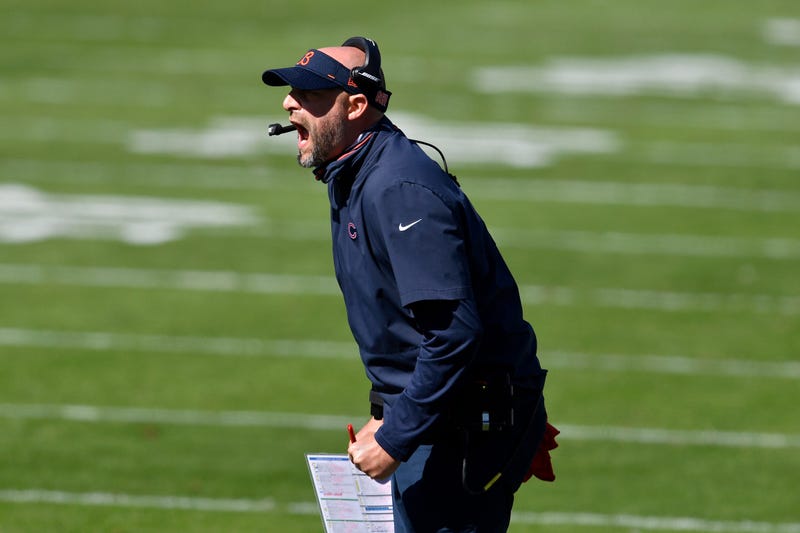 Head coach Matt Nagy of the Chicago Bears calls out instructions in the first quarter against the Carolina Panthers at Bank of America Stadium on October 18, 2020 in Charlotte, North Carolina. Photo credit Grant Halverson/Getty Images
By Rick Gregg

CHICAGO (WBBM NEWSRADIO) -- The Chicago Bears travel to Los Angeles on Monday to take on the Rams in Game 7. What can we expect?

Gregg: You beat LA two years ago. They got you last year. I saw a quote from Charles Leno Jr. He said this is the "death match." Would you put it the same way?

"Yeah, I don't know about that," Nagy laughed. "But I appreciate these guys understanding the ability for us to know that this is a big game. First of all, it is Monday night football, so you always can appreciate that, but playing against a really good football team tonight that is well-coached and has great players; so hopefully our guys are up for the challenge."

Cassidy: The Bears are looking good, 5-1, tied for first. Not a lot of serious injuries, but not getting a lot of love from some fans in the media. What's wrong with the Bears players, I don't know, thinking of themselves as the underdog, playing the no respect card tonight?

"No, not at all. I think for us we just understand that we know who we are as a team right now and we are building our identity as we go through this thing. Our defense is playing really good football. Our offense can certainly play better and we know that, but that's a good thing that we understand that and we are working hard to get that. Our special teams has been playing hard all year, so it is a marathon here and we want to make sure we understand each week how important it is. I love the attitude and the mentality of this team. We have been tested a lot this year and we have come through, so I appreciate that." 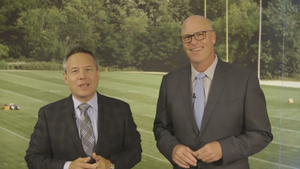 Gregg: How do you throw against these guys? They are number one in yards per pass attempts...I know you have got a tough defense, but you have one too.

"Yeah they do, they really do. I think it all starts up front," Nagy said. "You deal with a guy like Aaron Donald - each and every play you have to know where he's at. Even when there's times when he is double teamed, and sometimes triple teamed, he still finds ways, just like our guy Khalil Mack does and Akiem Hicks, they find ways to win their battles, so I think the biggest thing as you go into a game like this is to make sure you try to stay away from that big play that he can make, speaking of Aaron Donald in this game, and if you do that you can have some success. We did that two years ago in 2018 at home against them. I thought we did a good job against them, so we have to try to repeat something like that tonight."

Gregg: You always want to score early, you will say that every week, but is it especially important this week? Not only because you have not done it, but because the Rams have really been tight after half-time?

"Yeah, you are right. I think they are 29-0 when they have the lead at halftime, so that is a significant stat for them, but for us really as a whole right now as a team we just want to put together four good quarters and play one of those games when you come out of it everyone just feels really good with how we just played. So to be able to be 5-1 right now - we understand that, we really like that, but at the same point and time there is something to to that fact to be out there playing four quarters together in all three phases - four phases with the coaching staff and just see how good of a team we are when we do that," Nagy said.