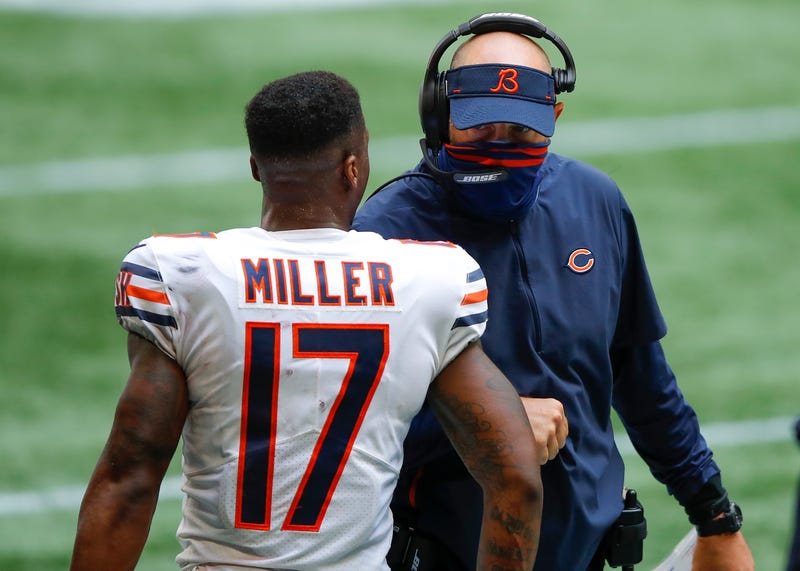 Anthony Miller #17 of the Chicago Bears reacts with head coach Matt Nagy in the fourth quarter of an NFL game against the Atlanta Falcons at Mercedes-Benz Stadium on September 27, 2020 in Atlanta, Georgia. Photo credit Todd Kirkland/Getty Images
By Josh Liss

CHICAGO (WBBM NEWSRADIO/AP) -- No matter how bad things might have seemed a week ago, the Atlanta Falcons somehow managed to make it even worse.

The Falcons surrendered a 16-point advantage in the final 6 1/2 minutes to the Chicago Bears, who got three touchdown passes from backup quarterback Nick Foles and pulled out a 30-26 win on Sunday. 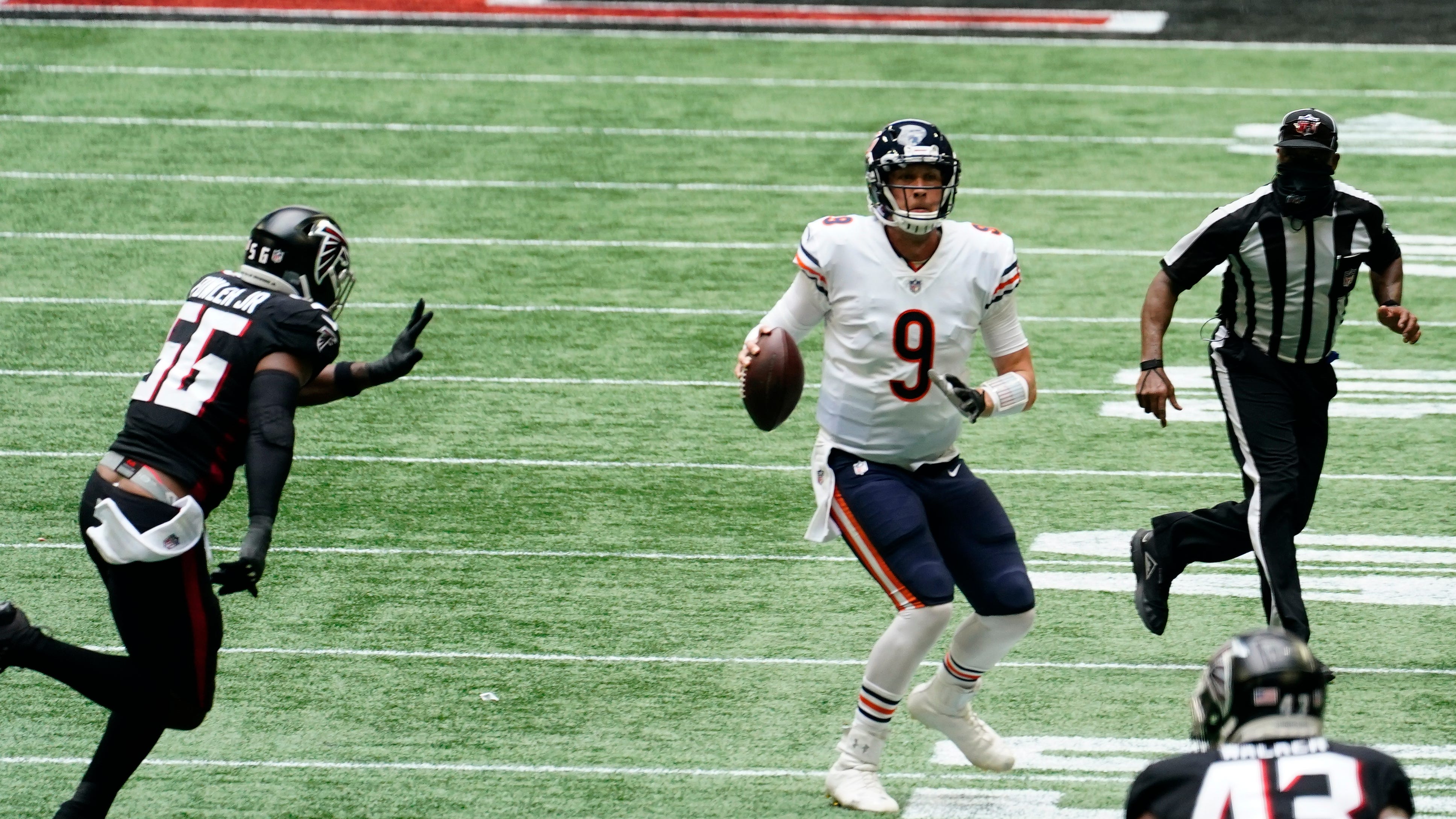 Atlanta (0-3) became the first team in NFL history to lose back-to-back games in which it led by 15 or more points in the final period, according to STATS.

“These last two weeks have been nothing short of crushing,” said Quinn, the sixth-year coach who desperately needed a strong start to the season after two straight losing campaigns.

This time, it was Foles who guided the improbable comeback after relieving erratic Mitchell Trubisky in the third quarter, pushing the Bears to 3-0 for the first time since 2013.

The former Super Bowl MVP won it with a 28-yard touchdown pass to Anthony Miller with 1:53 remaining.

“Pretty special,” said tight end Jimmy Graham, who had a pair of touchdown catches. “He was out there ad-libbing a bit for sure and checking and changing some plays. There’s one play he called, I’m like, ‘We got that?’ So it was pretty cool to see and pretty cool to be a part of.”

Foles had two apparent touchdown passes overturned by official reviews — and still managed to pull out the victory.

He tossed a 3-yard touchdown pass to Graham to make it 26-16 with 6:20 to go. The Falcons still appeared in good shape after the Bears failed on a 2-point attempt.

But Chicago got the ball back and moved quickly down the field. Foles connected with Allen Robinson on a short pass that turned into a 37-yard touchdown when Isaiah Oliver and Blidi Wreh-Wilson both missed tackles, allowing the receiver to scoot down the sideline.

After the Falcons went three-and-out on their third straight possession, Foles heaved one down the middle of the field with a rusher in his face. Miller hauled it in for the winning score.

The Falcons still had a shot, but Matt Ryan's pass was intercepted by Tashaun Gipson to seal it.

Trubisky set up Chicago's first touchdown with the second-longest run of his career, a 45-yarder after the Falcons abandoned the the entire middle of the field. He connected on Graham on a 2-yard scoring pass to pull the Bears within 16-10 at halftime.

But Foles got his chance after Trubisky threw an interception in the third quarter that led to a Falcons field goal, pushing the lead to 26-10.

“It kind of happened out of nowhere,” Trubisky said. “I just accepted the news. I had Nick’s back like he’s had mine. The situation sucked, but it was just the flow of the game and how it happened and coach made the decision that he felt was best for the team.”

"It was a fun win to be able to come back and get that," Nagy said. "I am just proud of our players and coaches for sticking through that whole thing."

Liss: What do you think about being the first team to rally from down 16 points or more in the fourth quarter twice in the same season, and you have done it in the first three games, with two different quarterbacks? What a stat.

"Yeah it is. They said that to me yesterday and it is pretty impressive that that has never been done before," Nagy said. "That's not something we want to live in, obviously, being down 16 points, two out of three games - but, at the same time it talks to who our players are - the character, the culture, the DNA that we have. I am proud of them."

Cassidy: Coach, congratulations, you are 3-0. Your team fights right to the very last minute. The big obvious question: is Nick Foles your new quarterback?

"Yeah that's tough. We got together last night, and we as coaches talked through some things. And today we are going to clean things up as well. We haven't made that decision yet, but we are going to go ahead and probably end up making it here today or tomorrow," Nagy said.

Liss: Yeah that was more than being a game manager, too. Some real smarts on display pre-snap, line of scrimmage, and more. What was Nick really able to do to gain control of the game the way he did?

"Well, I just think you can really see that when he came in...Nick's been through a lot. He's seen a lot of different defenses. You could see that yesterday. They were presenting some different looks on the back end and with what they were doing with a lot of stunts and gains on the front end, but you could see a field call out there and he was getting us into some good situations, and making different plays giving the wide receivers and tight ends chances to go out and make plays and that's what they did," Nagy said.

Liss: But you are down Tarik Cohen, yet 3-0 - so sort of conflicting news. The sad stuff with Tarik and the knee injury. There has been a real commitment to the running game noticeably this season, now he is out. How do you keep it rolling on the ground?

"Number one, super sad in regards to that with Tarik. He's such a guy that has so much energy to us and just the little things he does in the huddle, the way he handles his teammates and then obviously what he can do on the field. He's a weapon for us, but he was really in good spirits on the bus. He has a good perspective that there's a lot of people in worse situations than him right now, so I like that about him," Nagy said. "We have to continue getting that run game going and keep that going. That is going to be a big weapon for us as we move forward."

Liss: You got the Colts coming in unbeaten and perhaps imperfect. What's your big picture take on the start of this season? What do you want the players to think of themselves at this point?

"I think it is important to understand that to be 3-0 is really good. We like that, but we understand that there is a lot of season left. We are going to dig into the Colts today and see where they are at. I know they are a really good football team. Well coached by Frank Reich. I have a lot of respect for Frank, and they play hard, so again we are going to have to bring our A-game. But I wanted our guys to enjoy it last night, and now here we go, we get back to work today and really start game planning how we want to attack these guys," Nagy said.

You can hear more from Matt Nagy on the Bears Coaches Show on Mondays at 7 p.m.

The Chicago Bears take on the Indianapolis Colts at home Sunday at noon for Game 4.