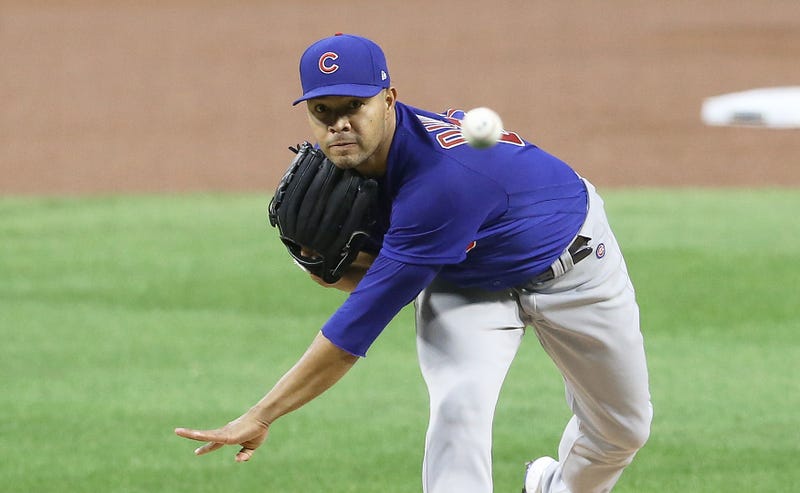 PITTSBURGH (AP) — Jacob Stallings hit a solo home run in the bottom of the ninth inning and the Pittsburgh Pirates stalled the Chicago Cubs' bid to win the NL Central with a 3-2 victory Tuesday night.

The Cubs began the day with a 4 ½-game lead over St. Louis and Cincinnati in the division standings and a magic number of four to clinch the title.

Stallings connected with one out off Andrew Chafin (1-2) to help the Pirates end their five-game losing streak and win for the just second time in 15 games. It was Stallings' third home run of the season and the third game-ending hit of his career.

Chafin got the final out of the eighth and first of the ninth before Stallings sent a 2-2 pitch down the left field line.

Anthony Rizzo's two-run homer in the eighth inning had pulled the Cubs into a tie at 2-all.

Richard Rodriguez (3-2) pitched a scoreless ninth for the win.

Chicago's Jose Quintana was activated from the injured list and made his first start of the season. The left-hander went two innings and gave up one run and one hit with one strikeout.

Quintana had made just two relief appearances this year. He underwent surgery before the season to repair nerve damage in his left thumb and then was sidelined by a strained lat.

Down 2-0 with two outs and none on in the eighth, the Cubs' Willson Contreras singled off Chris Stratton. Left-hander Sam Howard relieved and Rizzo sent a 2-0 pitch into the right-field stands for his 10th homer of the season and first off a lefty.

Both teams had just five hits.

The Cubs were without a hit until Cameron Maybin singled with one out in the fifth, ending Brault's hitless inning streak at 10 games. Making his last start of the season, the left-hander finished the year with a 13-inning scoreless streak.

Brault struck out six, walked three and only got into one serious jam. He hit Contreras and Rizzo with consecutive pitches to begin the fourth inning but got Javier Baez to ground into a double play and struck out Kyle Schwarber.

The Pirates took a 2-0 lead on RBI doubles by Erik Gonzalez in the second inning and Adam Frazier in the fifth.

The Cubs on Tuesday clinched a playoff spot, even though they lost to the Pirates because other teams lost.

Cubs: 3B Kris Bryant (right lower oblique tightness) sat out after leaving Monday's game. Manager David Ross is optimistic Bryant can avoid going on the IL. … To make room for Quintana on the roster, LHP Rex Brothers was optioned to the alternate site in South Bend, Indiana.

UP NEXT
Cubs: RHP Kyle Hendricks (6-4, 2.93) will start Wednesday night in the third game of the four-game series. He has allowed just seven walks in 73 2/3 innings this season.