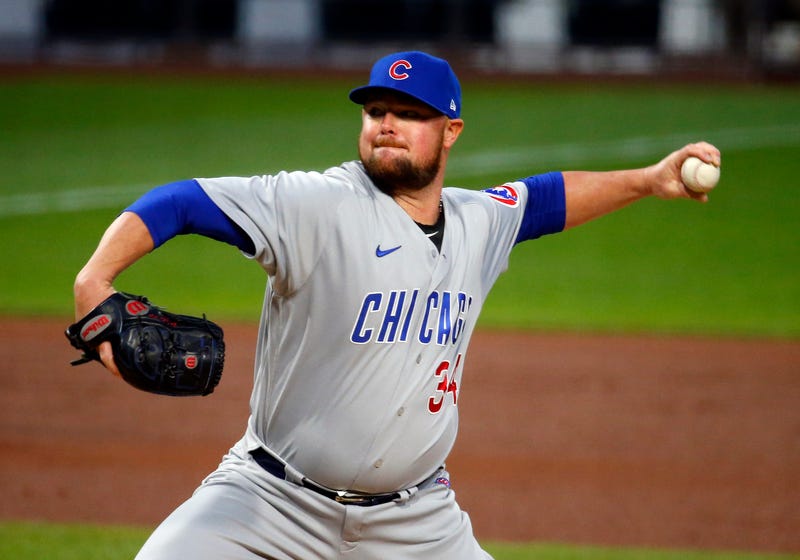 PITTSBURGH (AP) — Jon Lester scattered four hits over six innings and the Chicago Cubs inched closer to their first NL Central title since 2017 with a 5-0 win over the Pittsburgh Pirates on Monday night.

Lester (3-2) struck out one and walked one in his first victory since Aug. 11. He retired the first nine batters he faced and kept the lowest-scoring team in the majors in check. Only two of Pittsburgh's four hits left the infield, and the Pirates managed to get to third base just once while losing for the 13th time in 14 games.

Kyle Schwarber responded to being benched in the middle of a loss to Minnesota on Sunday by doubling twice and driving in a pair of insurance runs in the eighth with a shot to the gap in right-center field. Javy Báez drove in a run with a surprise bunt and Victor Caratini added an RBI double.

It wasn't all good news for Chicago. Third baseman Kris Bryant's injury-plagued 2020 took another turn when he left in the bottom of the third with what the team called right lower oblique tightness. The three-time All-Star and 2016 NL MVP spent time on the injured list earlier this season with a sprained ring finger on his left hand while also dealing with a wrist problem. Bryant has appeared in just 32 of Chicago's 54 games.

Pittsburgh rookie starter J.T. Brubaker (1-3) pitched 6 2/3 solid innings to bolster his bid for a shot at the starting rotation in 2021. Brubaker allowed two runs on four hits with a walk and a career-high nine strikeouts.

Brubaker, however, received no support from an offense that can't seem to finish the truncated 2020 season fast enough. The Pirates have scored two runs or less seven times during their current 1-13 skid. Their .215 batting average is next to last in the National League and their run total (190) is last in the majors.

The closest Pittsburgh came to threatening Lester came in the fourth when Bryan Reynolds and Ke'Bryan Hayes led off with consecutive singles. Erik Gonzalez hit into a fielder's choice, Colin Moran grounded out to first and Josh Bell flied out to end the threat.

TRAINER'S ROOM
Cubs: Put OF/INF Ildemaro Vargas on the 10-day injured list with a right hamstring strain. The club recalled RHP Adbert Alzolay from its alternative training site in South Bend, Indiana, to give the bullpen added depth for the final week of the regular season.


UP NEXT
Cubs: José Quintana will make his first start in nearly a year on Tuesday. The 31-year-old lefty has spent most of the season on the injured list with multiple health issues.