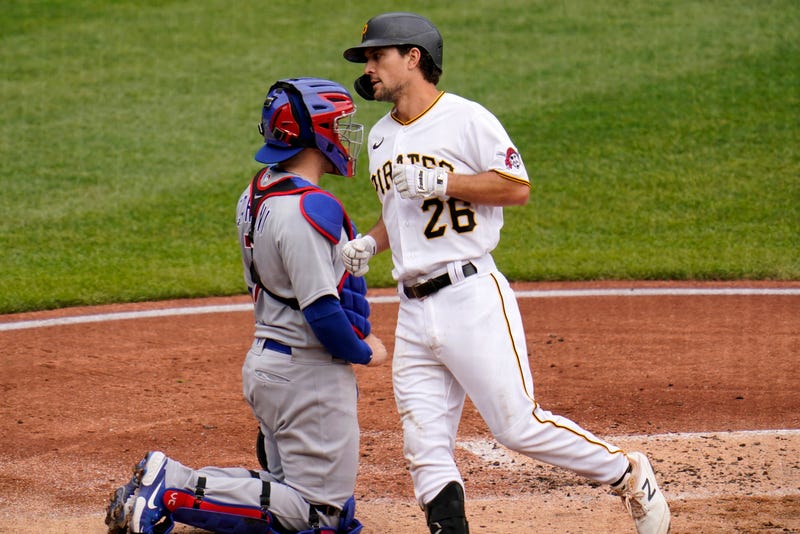 PITTSBURGH (AP) — Chad Kuhl pitched seven sharp innings and Colin Moran and Bryan Reynolds had home runs among their three hits each Thursday in the Pittsburgh Pirates' 7-0 victory over the slumping Chicago Cubs.

Kuhl (2-3) retired the first nine batters and had a no-hitter until Anthony Rizzo doubled to the wall in right-center with one out in the sixth inning.

The right-hander finished his comeback season on a strong note. He allowed two hits, struck out five hits and gave up three walks. He sat out last season while rehabbing after Tommy John surgery.

The Cubs, who clinched a postseason berth Tuesday, are stumbling toward the playoffs with five losses in six games. They have scored two or fewer runs in each of the five defeats.

Chicago's number for clinching the NL Central remained two. The Cubs' only other hit was Jason Kipnis' double in the seventh.

Geoff Hartlieb and Blake Cederlind completed the shutout in which the Pirates' staff was backed by four home runs.

Moran connected in the first inning to open the scoring and Reynolds homered in the second off Alec Mills (5-5). The Pirates got a third solo homer in the third inning from Adam Frazier to move in front 3-0 and Josh Bell hit a two-run blast in the fifth off Kyle Ryan that pushed the lead to 6-0.

Jared Oliva had the first two hits of his major league career for Pittsburgh with a pair of singles.

Mills lasted 3 2/3 innings and gave up four runs and eight hits with one walk and two strikeouts.

TRAINER'S ROOM
Cubs: CF Ian Happ did not play. Manager David Ross said he "tweaked" an ankle on Wednesday night while running the bases. … 3B Kris Bryant (lower right oblique stiffness) missed his third straight game and Ross did not have an update on his condition before the game.

UP NEXT
Cubs: Visit the crosstown White Sox on Friday night to open a three-game series to end the regular season. RHP Yu Darvish (7-3, 2.22 ERA) gets his last chance to impress NL Cy Young Award voters as he faces RHP Dylan Cease (5-3, 3.52).