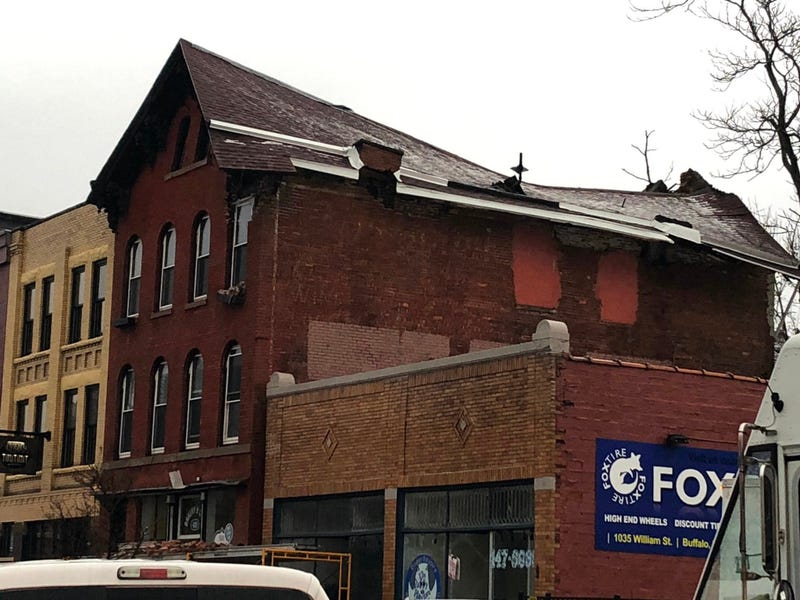 BUFFALO, N.Y. (WBEN) - An emergency demolition of 435 Ellicott Street took place on Wednesday after a bystander reported bricks falling from the roof.

Buffalo Fire received a call about the downtown building at 6:45 a.m. and soon decided that the building needed to come down after consultation with building engineers.

"The building is so un-sound at this point that we can't do anything with it," Buffalo Fire Chief Michael Tuberdyke told WBEN.

No one was injured as a result of the collapse. Tuberdyke said there was nobody was inside the vacant building and firefighters could not safely enter the building due to its condition.

Buffalo Fire Chief Michael Tuberdyke talks about what happened to the collapsed roof at 435 Ellicott behind him. pic.twitter.com/BwXnt9N1Y1

Throughout the morning, the roof shifted more towards the southern end of Ellicott Street.

Developer Rocco Termini, who owns property along that stretch of Ellicott Street, was furious over the building collapse because of its history.

"This building has been like this for 15 years and in poor condition," he said. "I've reported it to the city many times. I've been to housing court for various violations for the owner of this building. He owns six buildings in this neighborhood. They're all in the same condition. The city continuously does nothing as far as enforcing the building codes on this building."

The building is owned by Buffalo Properties Ltd. of Nyack, just outside of New York City.

Toutant Restaurant was impacted by the building's demolition. The restaurant announced on Facebook they will be closed on Wednesday.

"No one was in the building thank goodness, just hope the whiskey is safe now," the restaurant wrote.