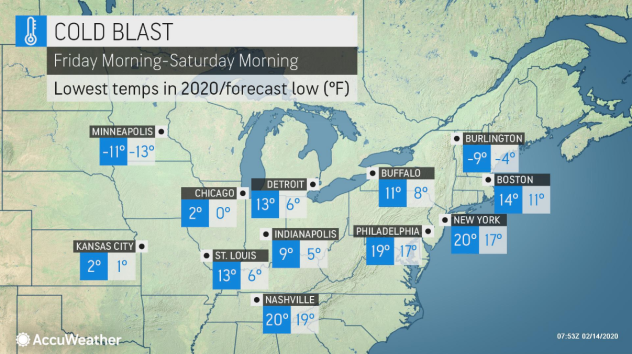 Buffalo, N.Y. (WBEN) - A brief bout of the big chill is impacting Western New York through tonight but will be quickly replaced by more moderate and seasonable conditions into the weekend.

The coldest air of the season so far is hitting the region with temperatures in the single digits Friday morning and expected to only rise slightly to the low teens throughout the day before recovering to the 30's on Saturday.

Minnesota's Anoka-Hennepin School District notified parents that classes were canceled “due to extreme winter weather conditions in the early morning hours.” Several other districts were closed, and some had e-learning days, meaning that students received instruction online.

Schools, businesses and organizations were also closed or were opening late in Nebraska and Iowa on Thursday, as temperatures dropped to about 10-20 degrees below average in the northern and central Plains. Montana, South Dakota, Wisconsin and northern Missouri were also under wind chill advisories.

The upper Midwest will see some relief from the bitter cold over the weekend, as the cold air is expected to push into the Ohio Valley and interior New England and the lower Great Lakes region by Friday.