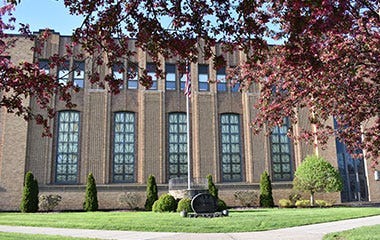 The Albion Middle School students were arrested Thursday after investigators determined a threat that started on an online gaming app was credible, Albion Police Chief Roland Nenni said by phone.

The students, all under 16 years old, are charged as juveniles with conspiracy to commit multiple murders, he said. Their names and ages weren't released.

Nenni did not disclose where police searched or where the weapons were located. But Orleans County District Attorney Joseph Cardone said via email that "there is no belief that the students had access to them and they were taken with cooperation of the students' families."

The threat also implied a broader danger, Nenni said, leading investigators to activate the school's threat assessment team and involve multiple local, state and federal agencies. Authorities have not yet identified a possible motive, he said.

"We're putting all the pieces together so we better understand it," he said.

The chief declined to say when the alleged attack was to occur, adding that it was not imminent.

"The State of New York has zero tolerance for violence in our schools.  I will do everything in my power as Governor to keep our children and our teachers safe. And I want to be crystal clear: any person posing a threat to our schools will face the harshest possible penalty under the law - whether or not they intend to actually execute that threat," says Cuomo in a statement. "I want to personally thank officials at the Albion Central School District, the Albion Police Department, the Orleans County District Attorney's office, the FBI and the New York State Police for their swift response to these threats. School and police officials across this state continue to be on high alert and I encourage anyone who notices any unusual or suspicious behavior to report it to school administrators and law enforcement right away."

In a letter to parents Wednesday, Superintendent Michael Bonnewell said the students were removed from school after officials learned they had shared "inappropriate and threatening messages and images" in the app.

"Reports note that the activity has continued in live conversations and at least one phone call," Bonnewell wrote. "Some of these messages have been shared, repeated and commented on by others in conversations and throughout social media."

A spokesman for Discord issued a statement saying the voice and messaging app takes immediate action when it becomes aware of harassment and illegal activity. It did not say what, if any action, was taken in the Albion case.

"We're committed to ensuring that Discord is a positive and safe place for all our users," wrote Sean Li, Discord director of trust and safety.

Albion, located between Rochester and Buffalo in western New York, has about 8,000 residents. About 400 students attend the middle school, according to the New York State Education Department website.