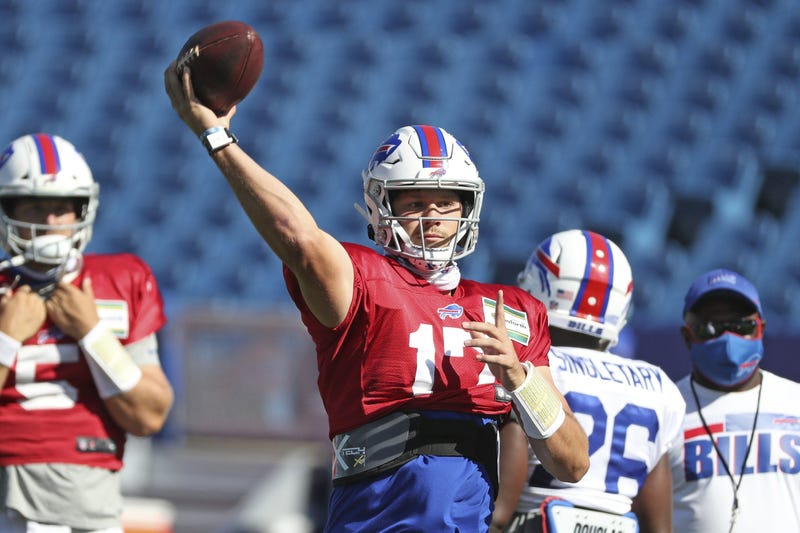 “I think that’s understandable,” McDermott said. “Until you’re able to silence that, it’s going to continue to come up. And I think at the end of the day, Josh wants to prove himself inside the building first. And I think he continues to do that and show his teammates who he is, and what he’s capable of.”

In a COVID-19-altered offseason like no other, a familiar question looms in Buffalo, which is scheduled to open by hosting the New York Jets on Sept. 13.

On paper, the Bills appear to have all the pieces to contend for their first AFC East title since 1995: continuity, depth, plus the offseason addition of receiver Stefon Diggs in a trade with Minnesota. The biggest concern for a team coming off its second playoff appearance in three years remains at quarterback, a position that’s been mostly unsettled since Hall of Famer Jim Kelly retired following the 1996 season.

Raw, strong-armed, mobile, prone to fumbling, Allen has yet to smooth the inconsistencies in his game since Buffalo traded up to select the Wyoming product with the seventh pick in the 2018 draft. Last year, he doubled his touchdowns passing total to 20 from his rookie season, and threw just nine interceptions — three fewer than 2018. Though his completion percentage jumped six points to 58.8, he still finished 32nd among NFL starters.

His inconsistencies were most apparent in a 22-19 overtime loss to Houston in an AFC wild-card playoff. Allen opened by going 13 of 20 for 131 yards and catching a touchdown pass in the first half. He went 11 of 26 for 133 yards and a lost fumble the rest of the way in a game Buffalo squandered a 16-0 third-quarter lead.

The outing still weighs on him.

“I’m definitely not over it,” Allen said.

On the bright side, he showed continued growth as a leader by organizing offseason workouts held on both coasts.

“He’s playing more confident than ever,” Beasley said in noting he doesn’t listen to the questions regarding Allen. “The people outside of here don’t matter. They don’t know. That’s it.”

There are far fewer questions raised over a defense which returns nine starters from a unit that allowed the third-fewest yards in the NFL last season.

Defensive tackle Harrison Phillips, who missed all but three games last season after blowing out his left knee, is in position to replace starter Star Lotulelei, who opted out this season. Free agent A.J. Klein is projected to take over for Lorenzo Alexander, who said he was retiring after last season.

The TV networks are starting to pay attention. After making a combined four Sunday/Monday night appearances since 2010, the Bills will make two Monday night appearances (at San Francisco, Dec. 7 and at New England, Dec. 28), and are scheduled to host Pittsburgh for a Sunday nighter on Dec. 13. Buffalo also hosts Kansas City in a Thursday night game Oct 15.

The Bills managed to take in stride a series of what turned out to be false positive coronavirus tests that forced several players, including Allen, to miss practice on Aug. 23. McDermott called it a good test run in the event players test positive during the season.

“There’ll be more challenges, whether it’s related to lab testing or other things that go on,” McDermott said. “The teams that can persevere through those moments and grow closer and stick together are the teams that are going to give themselves the best chance to win.”

Difficult as it might be to cover Diggs in practice, White is a big fan of the dynamic sixth-year receiver who’s topped 1,000 yards the past two seasons.

“Obviously, he’s a Grade A talent,” White said. “Just on paper, we look sexy (on offense). We look good.”