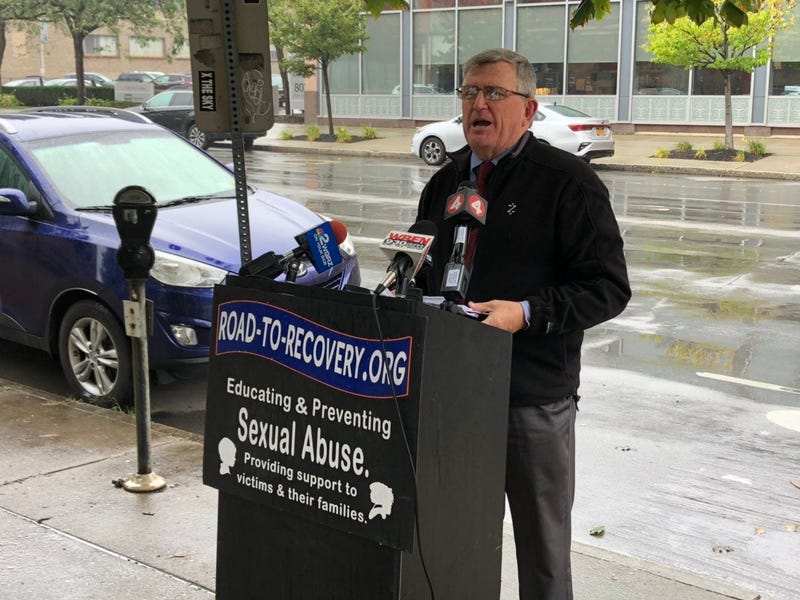 BUFFALO (WBEN) - In what now seems like a bi-monthly occurrence, sex abuse victims advocate Robert Hoatson stood across the street from the Buffalo Diocese on Wednesday morning to reveal another case of abuse and call for the resignation of Bishop Richard Malone.

Hoatson announced that a low six-figure IRCP settlement has been awarded to "John Doe," who was allegedly abused as a 13 year old by now deceased Fr. Maurus Schenck. This abuse occurred repeatedly in 1965 when the boy was a parishioner of St. Mary's Parish in Dunkirk.

"He worked with probably thousands of kids throughout his ministry - in charge of teaching kids the faith..." said Hoatson. "We're sure that, as a result of the coverage today, that other victims of Fr. Schenck are going to come forward. He had access to too many children, and the fact that they even advertised that he was particularly popular with the young is very upsetting."

He then touched on the scope of abuse within the Buffalo Diocese.

"The number, 178, priests and deacons who have abused in Buffalo is not surprising to me at all; in fact, I think the number is probably much larger," he began. "We're still at the beginning. 'John Doe,' for example, has now publicly named another one, credibly named another one. How many others are going to come forward now and name either a religious order priests or diocesan priest or deacon?"

Of course, Hoatson then made another plea for Bishop Malone to resign, and he specifically noted that the known scope of abuse is far worse and drastic then Malone initially made it out to be.

"I will never forget it - February 27, 2018, and then two days later, after Michael Whalen went public, I stood here, and I called for Bishop Malone to resign," said Hoatson. "Then he said, 'Oh, I guess we better put out a number..' - 42. Then we came back again and said that he still should resign because we know that you're not telling us the truth. Now, we're up to 178 - that's beyond the pale. The man has no business occupying the chair of the Bishop of Buffalo, New York."