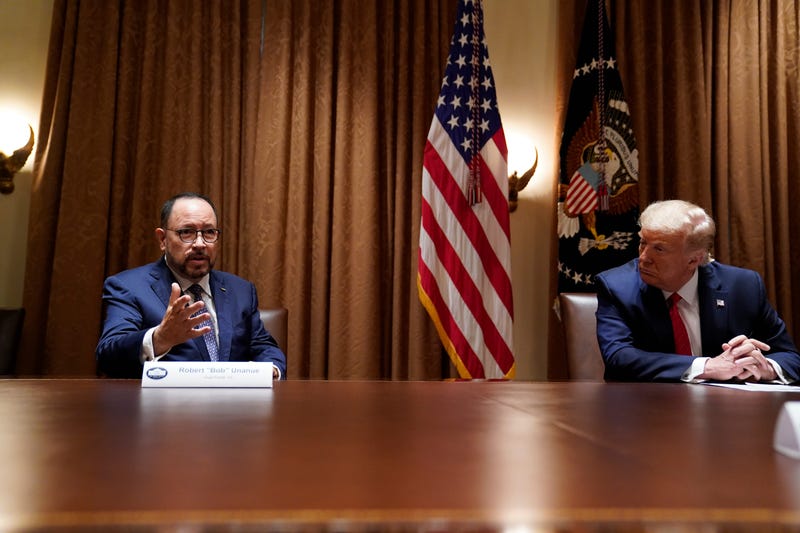 NEW YORK (AP) — The CEO of food company Goya is facing an uproar over his praise for President Donald Trump, with some Latino families purging their pantries of the products and scrambling to find alternatives to the beloved beans, seasoning and other products that have long been fixtures in their cooking.

But the controversy is also drawing attention to the mixed political sentiments of Latinos in the U.S. Many of them oppose Trump because of his derogatory comments about Hispanics and harsh policies toward immigration, most notably the separation of families at the U.S.-Mexico border. Hispanics have also been disproportionately hit hard by the coronavirus pandemic and related economic recession, causing them to question Trump's handling of both.

At the same time, the president has strong support among some people of Cuban and Venezuelan descent because of his tough stance against the authoritarian leaders of those countries. He has been working recently to court Latino voters who could swing the vote in states such as Arizona and Florida. On Wednesday, he welcomed President Andrés Manuel López Obrador to the White House, calling Mexico a cherished partner.

Standing beside Trump in the Rose Garden on Thursday, Goya CEO Robert Unanue declared: “We are truly blessed, at the same time, to have a leader like President Trump who is a builder.”

Lorgia Ortega, a retired payroll manager in Los Angeles who regularly puts about 10 Goya products in her shopping cart, said she called her four sisters when she saw Unanue's comments on Twitter.

"Does he realize who the people are that are buying his products?” said Ortega, who immigrated from El Salvador in 1974. “This president has insulted us so much.”

Ortega said her children, cousin and her daughter's mother-in-law all plan to stop buying Goya products, even if they don't know yet how to replace them.

“I’m going to go to the Latino market and whatever is next to them, I’m going to start trying that out,” Ortega said.

Goya was founded in Manhattan in 1936 by Prudencio Unanue and his wife Carolina, immigrants from Spain. The company calls itself the largest Hispanic-owned food company in the United States, listing 2,500 products including seasonings, cooking oils, beans, frozen products and snacks. Their offerings are ubiquitous in grocery stores across the U.S., sometimes taking up their own entire aisle.

Unanue stood by his words during a Friday appearance on “Fox & Friends": I’m not apologizing for saying — and especially when you’re called by the president of the United States — you’re gonna say, ‘no I’m sorry I’m busy, no thank you?' I didn’t say that to the Obamas and I didn’t say that to President Trump.”

The grandson of the company’s founder, Unanue has been a longtime donor to Republican political causes, with the exception of contributions to New Jersey Sen. Bob Menendez, a Democrat.

Adriana Waterston, senior vice president of Horowitz Research, which specializes in Hispanic consumers, said Goya routinely emerges among the most trusted brands in the studies she conducts for clients. She said that speaks to the potential for a deep sense of betrayal among Goya customers, though the brand's popularity will also make any boycott effort difficult.

“This Goya thing is going to go down as one of the biggest marketing faux pas of the year," Waterston said. “This kind of stance is a slap in the face to the community.”

The buying power of the rapidly growing U.S. Latino community is expected to reach $1.9 trillion in 2023, according to a 2019 report on Hispanic consumer trends by the data analytics company Nielsen. While that outlook is likely to be affected by the current recession, Hispanic spending will also be a key engine of economic recovery that many brands will want to tap into, said Stacie de Armas, vice president of strategic initiatives and consumer engagement at Nielsen.

In particular, de Armas said Hispanics spend more on food than other groups — 14% of their income, compared to 11% for non-Hispanic whites. It's also a family affair, with 79% of Latinos saying they shop for food with someone else, making word-of-mouth a powerful factor in buying choices, de Armas said. She said that could translate into an opening for Goya competitors seeking to capitalize on the controversy.

Jenny Robles, a public relations professional in New Jersey, said she had just finished making a chicken stew with three Goya products on Thursday night when her younger sister read a tweet about Unanue's praise for Trump. She said her Spanish-speaking mother shook her head in disapproval, and the whole family will no longer buy the products.

"This was the only type of food chain she relied on and used to feed us growing up, and it was now betraying us," said Robles, whose family immigrated from Ecuador when she was 3.

Still, as a public relations specialist, she acknowledged she did not know how successful the boycott would be against such a powerful brand. In her own family, she said, it would be up to the younger, bilingual generation to research alternatives on the internet.

Companies have long walked a tight-rope when it comes to engaging with Trump's White House.

In 2017, the top executive at Under Armour walked back comments in which he called Trump “an asset to the country.” Last year, the fitness clubs Equinox and SoulCycle attempted to distance themselves from billionaire Stephen Ross, a real estate developer whose Related Companies owns them, after he held a Trump fundraiser in the Hamptons.

Many of those that came to Goya's defense Friday pointed to the company's history of philanthropy.

This spring, Goya donated over 300,000 pounds of food, or about 270,000 meals, to food banks and other organizations as part of its pandemic relief effort. Last month, Goya showed up with thousands of pounds of food for families in the Bronx and Harlem who have been affected by COVID-19.

AP reporter Astrid Galvan contributed to this story from Phoenix.