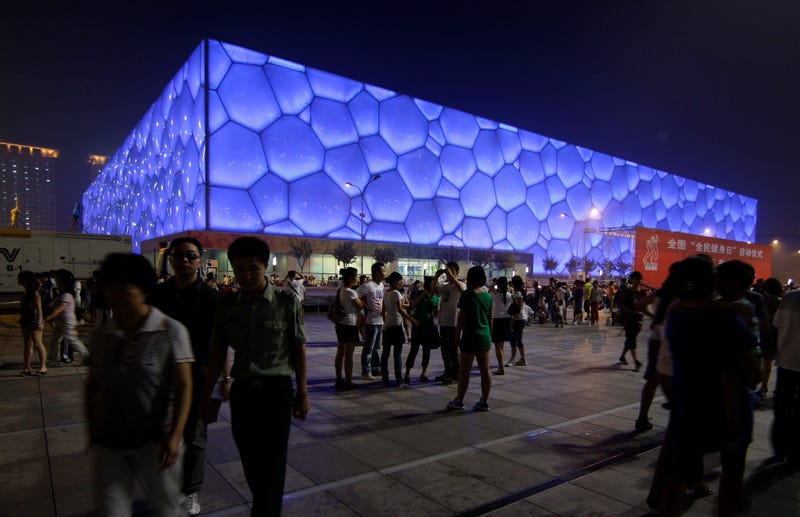 Photo credit File-Visitors walk past the National Aquatics Center, known as the Water Cube, on the eve of the one-year anniversary of the opening of the Olympic Games, in Beijing Friday, Aug. 7, 2009. The Olympics are remembered for the stars. That was true in Beijing in 2008, and the stars were Michael Phelps and Usain Bolt. But Beijing is also storied for its signature venues like the “Bird's Nest” stadium, and the “Water Cube” swimming venue. No Olympics before — or since — have impacted a city the way the Olympics did Beijing. (AP Photo/Greg Baker, File)
By The Associated Press

EDITORS — With the Tokyo Olympics postponed for a year because of the coronavirus pandemic, The Associated Press is looking back at the history of Summer Games. Here are some of the highlights of the 2008 Olympics in Beijing.

The Olympics are remembered for the stars. That was true in Beijing in 2008, when the stars were Michael Phelps and Usain Bolt.

But Beijing is also storied for its signature venues like the the 91,000-seat “Bird's Nest” stadium, and the nearby swimming venue called the “Water Cube.”

No games before — or since — have impacted a city the way the Olympics did Beijing. The 1992 Barcelona Olympics offered only a minor makeover compared with Beijing, where the Olympics were used to mark China's rise on the world stage. The closest comparison was Tokyo's 1964 Olympics.

China spent a reported $44 billion to prepare the city for the Olympics, and it might have spent even more than that. It built subway lines and venues, added a sprawling airport, constructed highways ringing the city and knocked down large portions of the old hutongs — the maze of narrow alleyways that used to define the Chinese capital — to make way for the new.

Hundreds of building cranes filled the sky as Beijing prepared, a jagged skyline often so polluted that visibility was limited to a few hundred meters — even on good days. As building intensified and the pollution thickened, the joke became that Beijing had pollution “you could sink your teeth into.”

Phelps and Bolt dominated, and IOC President Jacques Rogge called them “the two icons of the games.”

But there was more including China winning the most gold medals as the United States settled for the most overall.

The number 8 holds huge importance in Chinese culture for being lucky. The Olympics were held there in 2008 and opened on Aug. 8 at 8 p.m. Then there was Phelps, who won a record eight gold medals in the pool. The American won 23 gold medals overall in his career, but Beijing made him a household name — even in the city's fast-disappearing hutongs, where people all knew his name.

“The Beijing Olympics has witnessed the greatest Olympian of all time — Michael Phelps of the USA,” the pool announcer said as Phelps collected his gold in the 400-meter medley relay.

THE BOLT FROM JAMAICA

Bolt set the world record at 100 meters and 200 meters, and put up another world record in the 4x100 relay with his Jamaican team. The relay gold was eventually stripped from Bolt and his teammates when one runner — Nesta Carter — tested positive years later for a banned substance. Bolt duplicated three gold medals in London and in 2016 in Rio de Janeiro. But it was in Beijing that Bolt's famous swagger became famous, which at the time upset Rogge.

Liu Xiang won the gold medal in the 2004 Athens Olympics in the 110-meter hurdles. He was the world-record holder and was a national hero heading to Beijing. Maybe the country's most famous athlete — equal to basketball star Yao Ming — the national dream ended in a preliminary heat in Beijing when he pulled out with a right foot injury to the disbelief of more than 1 billion Chinese.

Liu retired in 2015 and was never the same after Beijing. In Athens, Liu was the first man from China to win an Olympic gold medal in track and field. He also won the world title in 2007.

The opening ceremony was probably the most elaborate in Olympic history, starting off with 2,008 drummers pounding in deafening precision on a muggy night in Beijing. At the end, former gymnast Li Ning — suspended by wires — appeared to run along the stadiums wall to light the cauldron.

China even attempted to control the weather at the Olympics with cloud seeding. It seemed to work a few days into the games as smog and soot cleared and the sun shone. It also helped that heavy industry was closed for months and vehicles were pulled off the streets.

German weightlifter Matthias Steiner was the center of the most emotive moment at the Olympics. Sitting in the bronze-medal position, he took gold on his final lift. He had pledged he'd win gold to his late wife Susann before she died from injuries in a car crash the year before. Steiner held up his wife's photo in his left hand on the podium and kissed it. He told the world he didn't want to be “standing up there alone.”

The IOC awarded the Olympics to Beijing in 2001, under the pretense that the games would change China. Francois Carrard, the IOC’s director general at the time, said there was “one issue on the table ... and that is human rights.”

The Olympics did not change China, and they did not bring more openness. Looking back 12 years, just the opposite has happened. China, in fact, used the Olympics in an attempt to change the world's perception of the country.

AP Sports Writer Stephen Wade reported for The Associated Press from Beijing for 2 1/2 years in the run-up and the follow-up to the 2008 Olympics.