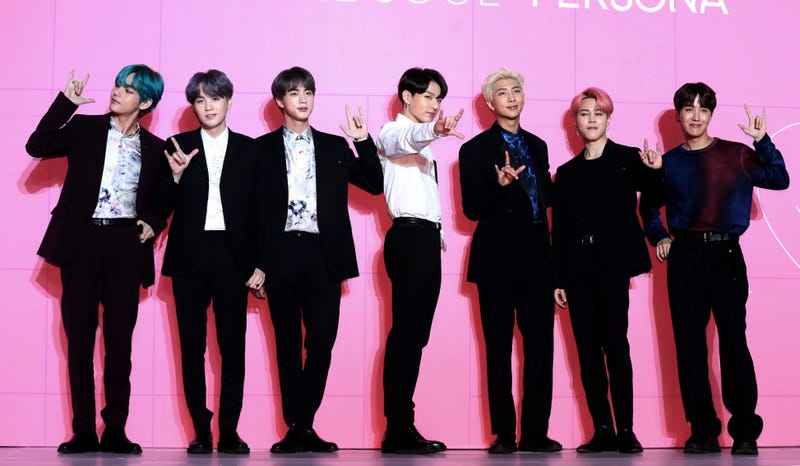 NEW YORK (AP) — Loud and happy screams erupt in unison from the seven-member pop stars BTS when they hear they have notched their first No. 1 hit on the all-genre Billboard Hot 100 chart.

“Dynamite,” the group’s first all-English song, debuted at No. 1 on the U.S. music charts this week, making BTS the first Korean pop act to top the chart. The upbeat song even supplanted “WAP,” the raunchy smash hit by Cardi B and Megan Thee Stallion, to claim the No. 1 position.

“Never expected it,” RM tells The Associated Press of beating “WAP” for the top spot. “Never! It’s like the song of the year.”

But getting their first chart-topping track seemed inevitable for the K-pop boy band, who have continued to find major success in the U.S. in the last few years. They’ve had four albums top Billboard’s 200 albums chart, they’ve achieved Top 10 successes on the Hot 100 with “Boy With Luv,” “On” and “Fake Love,” and in just minutes they’ve sold out U.S. football stadiums that some pop stars need to join forces to perform at.

And even at U.S. awards shows, they’ve gone from winning honors like “top social artist” to being named best group and best pop act, beating out Maroon 5, Imagine Dragons, twenty one pilots, Jonas Brothers and others. At Sunday’s MTV Video Music Awards, they won all four prizes they were nominated for.

When asked if BTS — who released their debut single in 2013 — felt like they’ve begun to earn more respect from the U.S., RM said: “We definitely feel that.”

“I think in the perspective of culture, I think it’s really important to be familiar. So first, we think ... that for many Americans (they were) not familiar with (us) — we look different, we (sing) different, we got some different choreography, music videos, like everything, even lifestyle. But I think as time goes by, we’re doing these shows and songs and concerts and awards, I think quite a lot of people in the American music market is getting, like, kind of close (to us),” he said. “I think it’s very good and that’s what we wanted actually.”

It could also be time for BTS’ first Grammy nomination.

“When we see (Western) artists ... get nominated for Grammys, they would go: ‘Yeah! Yeah!’” said j-hope, standing up from his chair and throwing a small punch in the air.

“Like Travis Scott,” he continued. “The nomination is meaningful to even (famous) people like that and to imagine that we could be nominated for Grammy, again, it would be such an honor and a great feeling.”

Nominees for the 2021 Grammy Awards will be announced later this year. The show doesn’t have a K-pop category, and while there is a best world music album award, there isn’t a song category for world and international music. Those songs, then, would compete for best pop duo/group performance — a highly competitive award reserved for big hits or collaborations featuring uber-popular performers.

But the success of “Dynamite” could explode into a Grammy nomination for BTS.

“The sheer thought of a nomination is thrilling,” said j-hope.

Though “Dynamite” has charted new territory for BTS, the song wasn’t even supposed to be released, RM explained. BTS had plans to tour but that changed due to the coronavirus: “The pandemic blew everything away.”

So they recorded “Dynamite” to give their die-hard fans, the BTS Army, “hope, positive energy,” RM said.

“And we think that it really touched their hearts.”

The group, which includes Jin, V, Jimin, and Jung Kook, says they’re busy recording a new album. They feel they have a grown in the seven years they’ve been a musical group.

“We’ve matured musically, as well as in the way we think. We’ve also developed a higher sense of responsibility. This has refined us and these developments are really being reflected in our music and our dance,” j-hope said.

The band members range from ages 23 to 27, and the youngest of clan, Jung Kook, celebrated his birthday this week with some special news.

“I received the news of our No. 1 on the Hot 100 chart on the day of my birthday, so it was really one celebration over another,” he said. “It was incredible.”