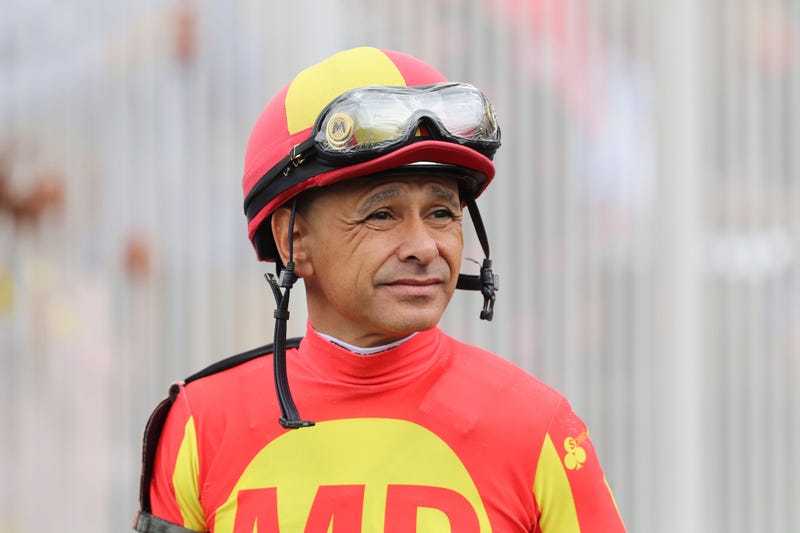 Photo credit FILE- In this May 3, 2019, file photo, jockey Mike Smith looks on before a horse race at Churchill Downs in Louisville, Ky. Jockeys competing in the rescheduled 146th Kentucky Derby have to arrive five days ahead and then quarantine upon returning to their home tracks, just one of many changes forced by the coronavirus pandemic. (AP Photo/Gregory Payan, File)
By The Associated Press

Jockeys riding in the rescheduled 146th Kentucky Derby have to arrive by Monday and then quarantine upon returning to their home tracks, just one of many changes forced by the coronavirus pandemic.

Initially, Churchill Downs had proposed an arrival date of Aug. 24 — nearly two weeks before the Derby on Sept. 5. Track officials backed down after out-of-state riders and their agents expressed concerns about losing lucrative business at home while being confined in Louisville.

The out-of-state riders already had to take a COVID-19 test last Monday and have the results reviewed by Churchill Downs. Their next required test comes Monday at the track, followed by a third test on Sept. 3.

In some cases, riders will have to quarantine upon returning to their home bases because of travel restrictions around the country.

As a result, some of the sport's biggest names are expected to take a pass on the Derby. Among them: New York-based Joel Rosario and brothers Irad and Jose Ortiz, and California-based Flavien Prat, who won last year aboard Country House after Maximum Security was disqualified.

In any other year, few jockeys would miss a chance to ride in the Derby, a career highlight for most.

“It’s not the fact that they have to give up 3-4 days going there,” two-time Derby winner Mike Smith said of his fellow riders. “It’s that they can’t go back to the places.”

Although the field and riders won't be set until Tuesday's post position draw, nearly half of this year's Derby jockeys could come from Kentucky.

Typically, out-of-town jockeys arrive a day or so before a major race and then jump back on a plane that night or morning after to return in time to ride on the following day’s card at their home track. Getting on a high volume of horses is necessary to ensure a living in a dangerous sport without guaranteed contracts.

After arriving in Louisville on Sunday night, Smith will have four days to kill before riding on Friday and Saturday.

“I’ll exercise a little bit just to stay fit and in the groove,” he said. “Good thing for me is I’m used to traveling.”

Smith has spent most of the summer at Del Mar, but the seaside track north of San Diego concludes on Labor Day. Even if he wanted to rush back, he couldn’t because he’d need to quarantine again. Saratoga in upstate New York also closes on Sept. 7.

Smith will bolster his trip to the Derby with a riding assignment the following weekend at Kentucky Downs near the Tennessee border.

New York’s Belmont Park doesn’t open until Sept. 18 and California’s Santa Anita starts a day later, making Kentucky Downs and its average of $2 million a day in purses a quick and potentially lucrative pit stop. Smith will be joined by some other Derby jockeys. Their coronavirus tests from Churchill Downs will be honored at the southern Kentucky track.