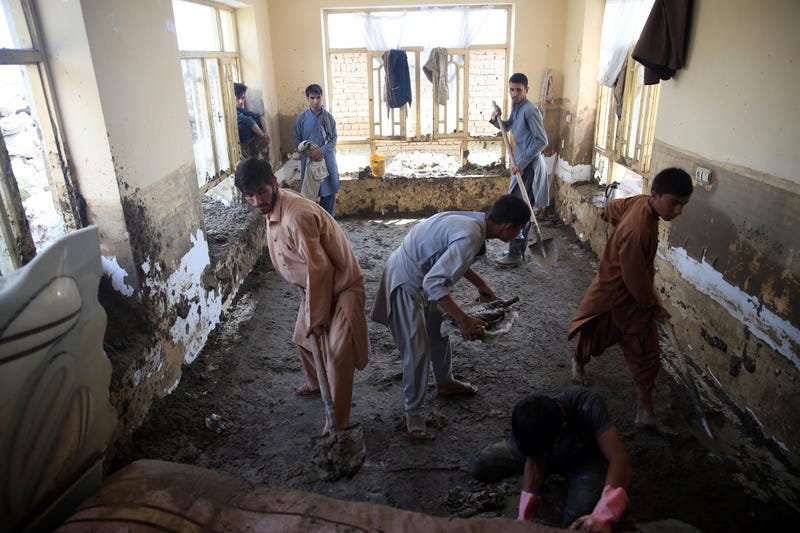 Photo credit Afghans remove mud from inside their house after a mudslide in Parwan province, north of Kabul, Afghanistan, Thursday, Aug. 27, 2020. The death toll from heavy flooding in northern and eastern Afghanistan rose to at least 150 on Thursday, with scores more injured as rescue crews searched for survivors beneath the mud and rubble of collapsed houses, officials said. (AP Photo/Rahmat Gul)
By The Associated Press

CHARIKAR, Afghanistan (AP) — The death toll from two days of heavy flooding in northern and eastern Afghanistan rose to at least 150 on Thursday, with scores more injured as rescue crews searched for survivors beneath the mud and rubble of collapsed houses, officials said.

Flash floods inundated the city of Charikar in northern Parwan province starting Tuesday night. The Health Ministry said the local hospital was partially destroyed and many injured were being transferred to the capital Kabul.

Powerful flood waters in the mountainous province dislocated thousands of large rocks that caused major injuries and destroyed entire homes, burying people under the rubble, officials said. Several excavators reached the area and were digging for those stuck beneath the rubble.

He said 102 people died in Parwan, 19 in the capital Kabul, 17 in northern Kapisa, seven in eastern Wardak, three in northern Panjshir, two in eastern Nangarhar and one in eastern Paktia and over 200 others were injured.

Wahida Shahkar, spokesperson for the Parwan provincial governor, said soldiers and police were deployed to help people search for their loved ones under the mud.

The head of the provincial hospital, Abdul Qasim Sangin, said every 30 minutes to an hour a corpse was being delivered to the hospital. He said several children were among the dead and some of the injured are in critical condition.

A popular vacation destination for many Afghans, Charikar was the location of many of Parwan province's casualties and also suffered much property destruction in the flooding.

Hamid Agha, 50, a Charikar resident, said he lost all his family members to the floods except two sons who are truck drivers and were delivering goods in another province.

Agha was able to pull himself out of the rising waters but was unable to save his family. “Out of 11 family member in the house only I am alive,” he said. “We buried six bodies but four others are still missing.”

A group of people was seen Thursday digging out their belongings, including blankets, clothes, mattresses and pillows, from houses partially or completely filled with mud.

Afghan President Ashraf Ghani in a videoconference promised full support to those who lost homes and family members over the past two days. A group of Afghan businessmen delivered food and cash to families in Parwan.

Ahmad Tameem Azimi, spokesman of the disaster management ministry, said flooding blocked highways to eastern and northern provinces. “Along with rescuing people we are working to open the highways back to traffic,” he said Wednesday.

More than 2,000 houses were destroyed in Parwan and over 1,000 people were displaced, he said.

Ground and air support sent to help those trapped by the flooding reached the provinces, Azimi said. The ministry had warned residents of possible flooding in the region with a social media alert late Tuesday, he added.

Azimi, said hundred of acres of agricultural land have been destroyed, with the heavy rain wiping out all the crops in 13 provinces. Houses and roads were destroyed in northern Kapisa, Panjshir and eastern Paktia provinces, Azimi said.