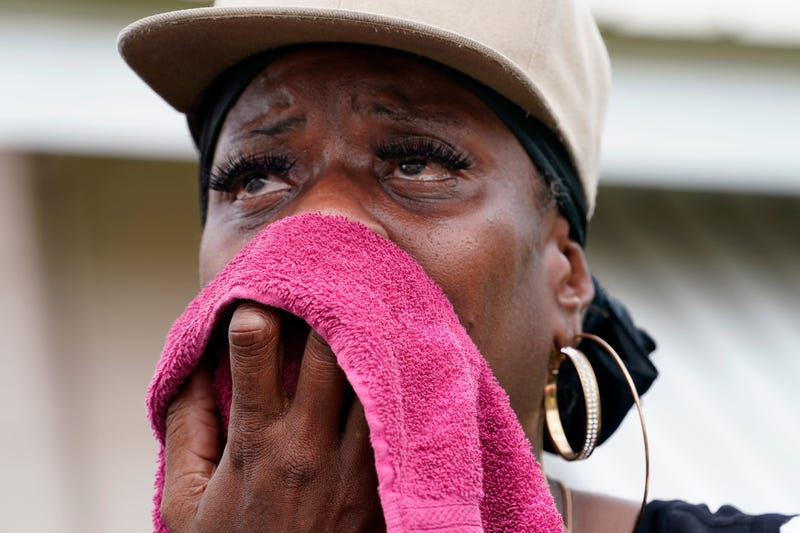 Photo credit Rakisha Murray cries in relief as she arrives to see her mother's home undamaged, after she returned from evacuation with her mother and other family in Lake Charles, La., in the aftermath of Hurricane Laura, Sunday, Aug. 30, 2020. (AP Photo/Gerald Herbert)
By The Associated Press

LAKE CHARLES, La. (AP) — In a matter of hours last week, Hurricane Laura tore through the tire shop Layla Winbush's family started just under a year ago, reducing most of it to rubble and scattering hundreds of tires across the lot. The storm also damaged her home, which now reeks of mold.

Federal and state officials are on the ground to help residents with home repairs and hotel stays. But Winbush said she feels alone, particularly after seeing a video of President Donald Trump, who visited the area Saturday, joking with Gulf Coast officials that they could sell copies of his signature for $10,000.

As evacuated Lake Charles residents return home, many worry they wouldn’t have enough support from both the federal and state governments as they face a rebuilding process certain to take several months, if not longer.

Louisiana Gov. John Bel Edwards on Monday warned that residents were in for a long recovery, with 324,000 power outages across the state and 600,000 people either without water or under boil water advisories. Meanwhile, stifling heat and humidity were adding to the trouble of clearing out debris, patching roofs and starting rebuilding work.

“This is going to be a very difficult storm to recover from,” he said.

But Edwards praised the federal response so far, saying the Federal Emergency Management Agency was quick to arrive with assistance and sent hundreds of workers for recovery efforts. On Monday, Edwards announced a temporary roofing program operated by the U.S. Army Corps of Engineers.

Nineteen deaths in Texas and Louisiana have been attributed to the storm; half were killed by carbon monoxide poisoning from the unsafe operation of generators. The latest, reported Monday by Louisiana's health department, was a 49-year-old man in Rapides Parish who died when a tree he was cutting fell on him.

The Category 4 hurricane made landfall Thursday just south of Lake Charles near Cameron, Louisiana, packing 150-mph (240-kph) winds and a storm surge as high as 15 feet (4.5 meters) in some areas.

Needs are substantial. More than 67,000 people in Louisiana have registered for assistance from FEMA so far, according to Edwards' office.

In hard-hit Calcasieu Parish, some waited hours for tarps, water and other supplies at distribution sites, said parish spokesperson Tom Hoefer. The parish had been without power, and in many areas, including the parish seat of Lake Charles that's home to more than 78,000 people, water had not been flowing from taps, he said.

Crews will have to rebuild hundreds of transmission towers and reset downed power poles and lines, said Scott Aaronson, vice president of security and preparedness for the Edison Electric Institute, the association of investor-owned electric companies in the U.S.

Evacuees were spread across Louisiana and Texas, as officials tried to keep people from group shelters because of the coronavirus outbreak.

In New Orleans, city officials said about 9,200 evacuees were housed across 33 hotels. Volunteer organizations helped the city assemble a resource center, providing counseling and medical services along with donated food, clothing and diapers, according to Collin Arnold, the city’s emergency preparedness director.

“It’s extremely complicated,” Arnold said. “You’re dealing with 33 different properties and the amount of personnel required to have people at every property is pretty staggering ... We would be congregate sheltering in any other hurricane season without COVID-19 hanging over our heads. We would be in large stadiums, arenas."

In Lake Charles, many people were staying outside town. But James Townley said he would remain in his home, as he did during the storm.

The front of his trailer had been blown away, leaving a single toilet exposed to the elements.

Townley lay on a sofa beside a fan — connected to a neighbor's generator — circulating hot, humid air. The 56-year-old's shirt was off, revealing scars from the open-heart surgery he had several years ago. He said he was out of medication for his heart and kidneys and had requested aid from FEMA — but not heard back.

One silver pickup truck winding through Lake Charles’ streets carried four generations of a single family — six people inside the cab and three riding on the flatbed along with suitcases and bags filled with belongings. The family was visiting homes where they each lived, assessing what they had lost.

Driving the pickup was 53-year-old Patricia Mingo Lavergne. When Lavergne parked outside the house she shares with her husband, a duplex just north of train tracks bisecting the city, several family members began to pray and wipe away tears.

The pecan tree that shaded her front yard had cracked and fallen in front of the door. Insulation had burst through the ceiling and fallen in tufts over one bedroom. In another room, she pulled out two drawers filled with neatly folded clothes saved for her daughter’s child due in January.

The family has requested help from FEMA, but Lavergne said she didn't have a checking account in which to receive federal money.

"It’s frustrating," she said. “I’ve already been going through a lot, and this is a lot more on my shoulders.”

Winbush, 19, and her family were staying with relatives in Beaumont, Texas, over an hour’s drive away. Her mother, Monique Benjamin, stood with Winbush and two of her siblings in front of what was left of the tire shop.

Benjamin and Winbush stayed cheerful as they described services the shop offered and successes they had building it. The business is insured.

“Even though we may cry in the restroom and wipe our faces later, we got to stay strong,” Benjamin said.