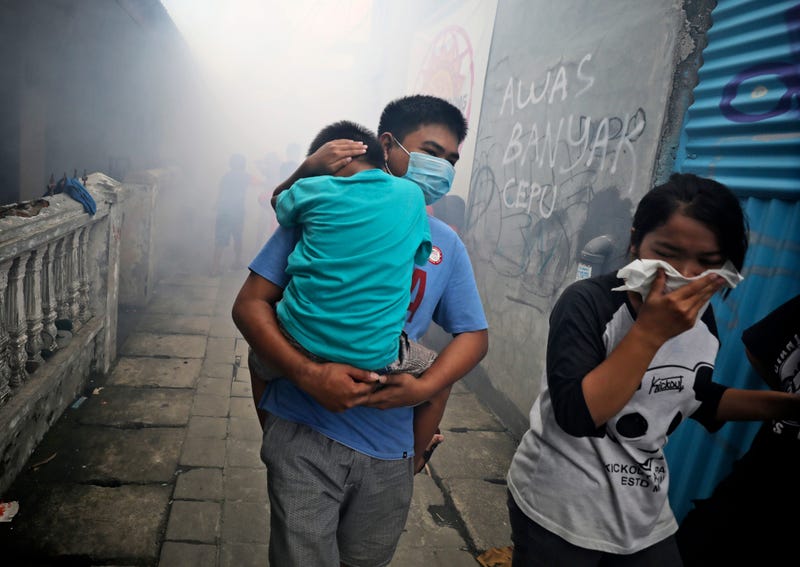 Photo credit People move away as health workers fumigate a slum to prevent an outbreak of dengue fever in Jakarta, Indonesia, on Monday, March 23, 2020. While 2019 was the worst year on record for global dengue cases, experts fear an even bigger surge is possible because their efforts to combat it were hampered by restrictions imposed in the coronavirus pandemic. (AP Photo/Dita Alangkara)
By The Associated Press

JAKARTA, Indonesia (AP) — To slow the spread of the coronavirus, governments issued lockdowns to keep people at home. They curtailed activities that affected services like trash collection. They tried to shield hospitals from a surge of patients.

But the cascading effects of these restrictions also are hampering efforts to cope with seasonal outbreaks of dengue, an incurable, mosquito-borne disease that is also known as “breakbone fever" for its severely painful symptoms.

Southeast Asian countries like Singapore and Indonesia have dealt with concurrent outbreaks of dengue and coronavirus this year. In Brazil, where there are over 1.6 million COVID-19 infections, at least 1.1 million cases of dengue have been reported, with nearly 400 deaths, according to the Pan American Health Organization.

Dengue cases are likely to rise soon with the start of seasonal rains in Latin American countries like Cuba, Chile and Costa Rica, as well as the South Asian countries of India and Pakistan.

Dengue typically isn’t fatal, but severe cases may require hospitalization. Prevention efforts targeted at destroying mosquito-breeding sites, like removing trash or old tires and other objects containing standing water, are still the best ways to curb the spread of the disease. But coronavirus-era lockdowns and other restrictions have meant that these efforts have been reduced or stopped altogether in many countries.

In northwestern Pakistan, plans to disinfect tire shops and markets that had dengue outbreaks in 2019 were shelved due to funds being used for the coronavirus, said Dr. Rizwan Kundi, head of the Young Doctor’s Association.

Health workers who would destroy mosquito-breeding sites in India’s capital of New Delhi are also screening people for the virus.

Having to identify thousands of virus cases has meant that dengue surveillance has suffered in many Latin American countries, added Dr. Maria Franca Tallarico, the head of health for the Americas regional office of the International Federation of Red Cross and Red Crescent Societies.

Experts say that disrupting such prevention efforts is ominous for the global battle against dengue.

The World Health Organization says 2019 was the worst year on record for dengue cases, with every region affected, and some countries were hit for the first time.

Aedes aegypti, the mosquito that spreads dengue, is most prevalent in cities, and experts warn that increased urbanization and warming temperatures due to climate change means that its range will keep increasing.

Experts say that while reduced travel means fewer opportunities for mosquitoes to bite people with dengue to become carriers themselves, the coronavirus pandemic has introduced other variables.

Staying home -- one way to slow outbreaks of COVID-19, especially in cities -- poses greater risks for spreading dengue, said Singapore’s National Environment Agency (NEA). That's because the Aedes mosquito bites during the day, and with more people staying home, where mosquito populations are high, the more likely they are to be bitten.

The impact is already visible. Singapore recorded a five-fold increase in the mosquito larvae detected in homes and common corridors of residential areas during the two-month coronavirus lockdown period, compared with the previous two months. By July 6, the total of dengue cases in Singapore was more than 15,500. The NEA says the number of cases this year is expected to exceed the 22,170 cases reported in 2013, which at the time was the largest dengue outbreak in Singapore’s history.

Oliver Brady, an associate professor at the London School of Hygiene & Tropical Medicine, said Central America and the Caribbean were at higher risk due to overlapping outbreaks.

Working with communities in Latin America to stop mosquitoes from breeding had been the most successful anti-dengue strategy in recent years, Tallarico said. But with strict limitations on movement, she said they didn’t know whether these measures were still happening, and “this is the big concern for us.”

A shortage of protective equipment also means limiting the number of first responders who can check on people with fever or cough, she said.

“My concern is that you have (many) more cases of dengue ... but the capacity of the system to notify (and) test is limited,” she said.

Dengue patients need acute care, and this could lead to a “double whammy” that overwhelms health care systems, said Scott O’Neill, founder and director of the World Mosquito Program.

Global research into dengue also will be affected by the coronavirus pandemic, Brady said.

At the WMP Tahija Foundation Research Laboratory in Yogyakarta, Indonesia, which has been studying dengue for years, “it became too difficult to enroll patients with the social-distancing measures,” O’Neill said. The facility is now being used as a COVID-19 testing site.

Similarly, the National Institute of Malaria Research in New Delhi has stopped all field work after it was converted into a center for validating COVID-19 testing kits, said Dr. R.C Dhiman, who studies mosquitoes and climate change.

In Bangladesh, where dengue season is just starting, the launch of a mobile app to help people report their cases was delayed by the pandemic, said Afsana Alamgir Khan, who oversees the country's dengue program.

Experts say such disruptions by the coronavirus will only increase the risks of dengue infections.