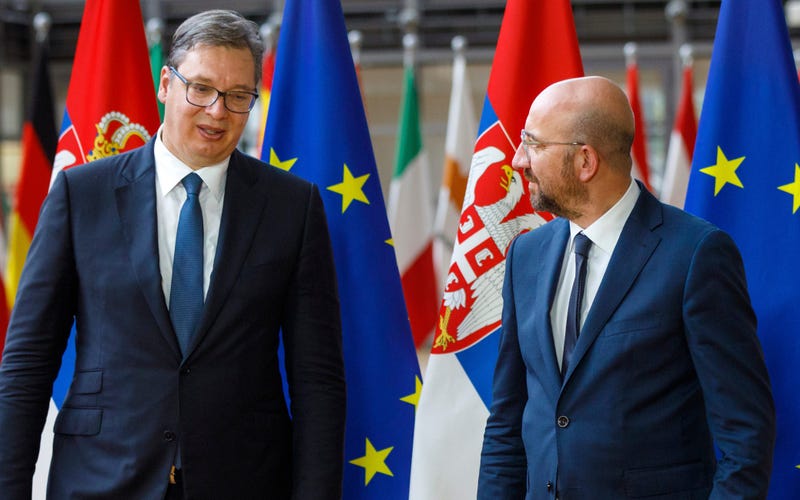 Photo credit FILE - In this Friday, June 26, 2020 file photo, European Council President Charles Michel, right, greets Serbian President Aleksandar Vucic prior to a meeting at the European Council building in Brussels. The leaders of Serbia and Kosovo committed Monday, Sept. 7, 2020 to European Union-brokered talks on normalizing their strained ties and appeared to play down the importance of a surprise announcement last week by U.S. President Donald Trump that they are beefing up economic cooperation. (AP Photo/Olivier Matthys, Pool, File)
By The Associated Press

BRUSSELS (AP) — The European Union warned Serbia and Kosovo on Monday that they could undermine their EU membership hopes by moving their Israeli embassies to Jerusalem, as U.S. President Donald Trump’s surprise announcement about the change left officials in Belgrade and Pristina scrambling to limit the political fallout.

In an unexpected move last week, Trump said that Serbia and Kosovo had agreed to normalize economic ties as part of U.S.-brokered talks that include Belgrade moving its embassy to Jerusalem, and mutual recognition between Israel and Kosovo.

It surprised the Europeans, who are leading complex talks between Serbia and its former territory of Kosovo on improving their long-strained relations, while Serbian officials appeared to be watering down their commitment to Trump, and Kosovo sought to allay concerns among Muslim countries.

The 27-nation EU’s long-held policy is that Jerusalem’s status should be worked out between Israel and the Palestinians as part of broader peace negotiations, and that Serbia — as a candidate to join the bloc — should respect that.

“There is no EU member state with an embassy in Jerusalem,” European Commission spokesman Peter Stano said. “Any diplomatic steps that could call into question the EU’s common position on Jerusalem are a matter of serious concern and regret.”

Praising what he said was “a major breakthrough” and “a truly historic commitment,” Trump — deep into campaigning ahead of November’s presidential election — announced Friday that “Serbia and Kosovo have each committed to economic normalization.”

Trump also said that Serbia has committed to open a commercial office in Jerusalem this month and move its embassy there in July. The Trump administration recognized Jerusalem as Israel’s capital in late 2017 and moved the U.S. embassy there in May 2018.

Stano, speaking as Serbian President Aleksander Vucic and Kosovo Prime Minster Avdullah Hoti were holding a new round of talks in Brussels on normalizing their relations, said the EU was told in advance only about the economic aspects of the White House event, not about movements in Jerusalem.

In Belgrade, Serbian officials appeared to be stepping back from the embassy pledge, with Foreign Minister Ivica Dacic saying the final decision will still have to be discussed by the government and will depend on “a number of factors” including future development of ties with Israel.

Kosovo’s President Hashim Thaci, meanwhile, was on the phone with Turkey's President Recep Tayyip Erdogan, trying to assuage fears about the decision to recognize Israel expressed by Turkey and the Arab League group of countries.

“Such a recognition will not violate under any circumstances the strategic, friendly and fraternal partnership with Turkey,” Thaci said after the conversation.

Israeli Prime Minister Benjamin Netanyahu welcomed the deal that establishes diplomatic relations with Kosovo, and would have both Kosovo and Serbia open embassies in Jerusalem. They would join the U.S. and Guatemala as the only countries with embassies in the contested city, whose eastern sector is claimed by the Palestinians as the capital of a future state.

“We will continue efforts so that additional European countries will transfer their embassies to Jerusalem,” Netanyahu said Friday. He noted that Kosovo becomes the first Muslim-majority country to open an embassy in Jerusalem.

Kosovo unilaterally declared independence from Serbia in 2008, around a decade after Belgrade sent troops into its former territory to crush an uprising by ethnic Albanian separatists. Serbia refuses to recognize Kosovo’s statehood, and tensions have simmered ever since.

The EU-facilitated negotiations, which the Europeans say is the only way to address their membership hopes, started in March 2011 and have produced more than a dozen agreements, but most of them have not been observed.

The talks stalled in November 2018 and only resumed in July after a parallel U.S. negotiating effort began.

But as they met again on Monday, Vucic and Hoti recommitted to the European track, saying “that they attach the highest priority to EU integration and to continuing the work on the EU-facilitated Belgrade-Pristina Dialogue.”

In what was described as a “joint statement” issued by the office of EU foreign policy chief Josep Borrell, Vucic and Hoti also said they "committed to redoubling their efforts to ensure further EU alignment in accordance with their respective obligations.”

They appeared to play down Friday's announcement, by saying that “the recently agreed documents in Washington, D.C., building on previous Dialogue-related commitments undertaken by the two parties, could provide a useful contribution to reaching a comprehensive, legally binding agreement on normalization of relations.”

Dusan Stojanovic in Belgrade, Llazar Semini in Tirana, Albania, and Josef Federman in Jerusalem contributed to this report