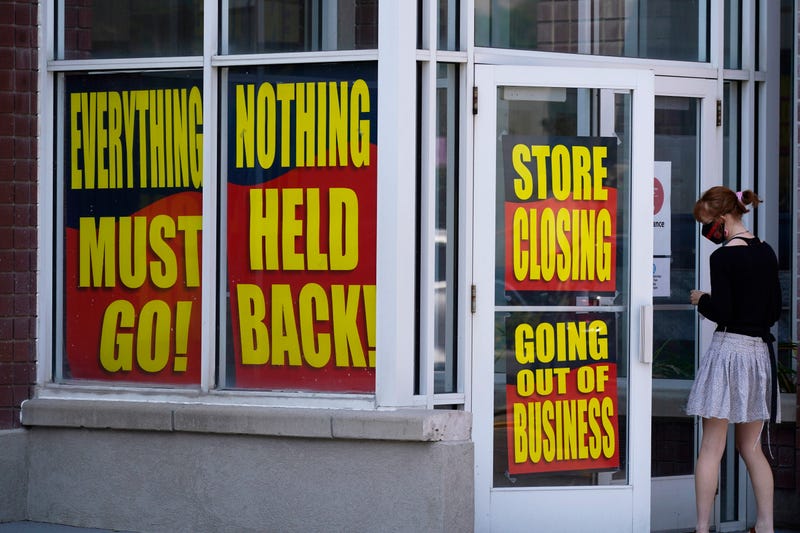 Photo credit Store closing signs are shown on a Stein Mart store Sunday, Aug. 30, 2020, in Salt Lake City. The latest Federal Reserve survey of U.S. economic activity found generally modest gains in August but also pessimism about the future given the threats posed by the coronavirus. The Fed report made public Wednesday, Sept. 2, said that a theme echoed across the country is the continued uncertainty stemming from the pandemic and its negative effect on consumer and business activity.(AP Photo/Rick Bowmer)
By The Associated Press

WASHINGTON (AP) — The latest Federal Reserve survey of U.S. economic activity found generally modest gains in August but also pessimism about the future given the threats posed by the coronavirus.

The Fed report made public Wednesday said that a theme echoed across the country is the continued uncertainty stemming from the pandemic and its negative effect on consumer and business activity.

The report, based on responses gathered before Aug. 24, found that economic activity had increased modestly from late July but remained well below levels seen before the pandemic hit in March.

The coronavirus outbreak has pushed the country into a deep recession and resulted in millions of people losing their jobs and thousands of businesses struggling to survive. This despite the Fed and Congress providing massive amounts of economic support.

The report, known as the Beige Book, is compiled from responses from business contacted by Fed's 12 regional banks. The information will help inform Fed policymakers when they next meet to set interest-rate policies on Sept. 15-16.

At the Fed’s last meeting in July, the central bank kept its key policy rate unchanged at a record low near zero. It also pledged to keep rates low until central bank officials are “confident that the economy has weathered recent events” stemming from the pandemic-induced recession.

Last week, the Fed announced it had completed an 18-month review of its monetary policy and decided to switch from a 2% target for inflation to inflation averaging. Under the new system, the Fed will allow inflation to run above 2% for a time to make up for years in which it has failed to reach the Fed’s 2% target.

Economists believe this change makes it unlikely that the Fed will be tightening credit any time over at least the next two years.

The Fed report said that consumer spending, which accounts for 70% of economic activity, had increased, pushed higher by strong auto sales and some improvements in tourism and retail sales.

But in a potentially troubling sign, the report noted a recent slowdown in consumer spending. It did not make a link, but the $600 weekly increase in unemployment benefits expired at the end of July. Congress took an August recess when it was not able to overcome wide differences between Democrats and Republicans over what a new economic relief package should look like.

The report said that firms that were hiring were having trouble finding workers, with day care hard to obtain and uncertainty remaining over the coming school year.

Wages were described as basically flat. Some companies have rolled back increases that had been linked to hazard pay or high-exposure jobs in the early weeks of the pandemic.

The report said that residential construction activity was a bright spot. Home sales and home prices have risen, reflecting increased housing demand. Manufacturing has also increased in most of the Fed's districts.