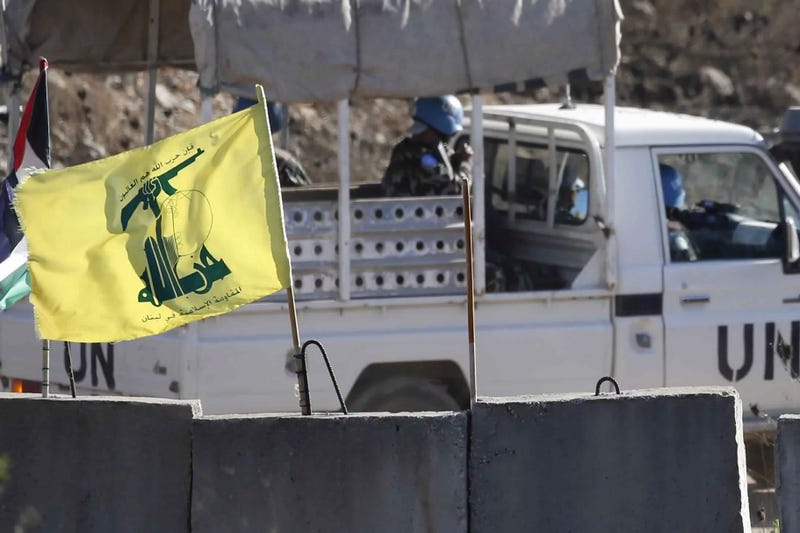 Photo credit A UN patrol drives past a Hezbollah flag and a concrete barrier in southern Lebanon on the border with Israel, Wednesday, Aug. 26, 2020. Israeli attack helicopters struck observation posts of the militant Hezbollah group along the Lebanon border overnight after shots were fired at Israeli troops operating in the area, the military said Wednesday. (AP Photo/Ariel Schalit)
By The Associated Press

JERUSALEM (AP) — Israeli attack helicopters struck observation posts of the militant Hezbollah group along the Lebanon border overnight after shots were fired at Israeli troops operating in the area, the military said Wednesday.

Israel has been bracing for a possible attack by the Iran-backed Lebanese militants since an Israeli airstrike killed a Hezbollah fighter in neighboring Syria last month. Israeli troops have also traded fire in recent weeks with the Palestinian militant group Hamas in Gaza.

The military said no Israeli forces were wounded, and there were no reports of casualties in Lebanon. Earlier, Israeli troops fired flares and smoke shells along the heavily guarded border. Hezbollah-run Al-Manar TV reported that two homes were damaged by the shelling.

The military also ordered civilians in nearby communities to shelter in place and blocked roads near the border. Those restrictions were lifted early Wednesday. The incident took place near the northern Israeli town of Manara.

In a briefing with reporters on Wednesday evening, Israeli military spokesman Lt. Col. Jonathan Conricus said the fighting began when Hezbollah snipers, located between two U.N. peacekeeping positions, opened fire. He accused the militant group of using the U.N. positions for cover, and of deliberately locating its militiamen to draw fire that could have harmed the peacekeepers.

“The choice of the location by Hezbollah is not accidental,” he said.

The flareup occurred just days before the U.N. Security Council is to decide on whether to renew the mandate of the peacekeeping force in Lebanon, known as UNIFIL.

Israel has repeatedly accused Hezbollah of violating a 2006 U.N. cease-fire resolution barring it from military activity in southern Lebanon, and complained that UNIFIL has been ineffective at enforcing the resolution. Ahead of the Security Council vote, Israel and its ally, the United States, are seeking changes in UNIFIL's operations to give the force more authority to conduct weapons searches.

Conricus said the Hezbollah operatives were just a few dozen meters from one of the U.N. positions, though he said visibility was poor and it was impossible to say at this stage whether the peacekeepers were aware of the snipers' presence.

In Lebanon, Hezbollah leader Hassan Nasrallah said in an evening televised speech that the incident was “very important and sensitive for us" but that he would comment further at a later date.

UNIFIL said it observed flares fired from several Israeli positions along the border and were were informed that there had been small arms fire from Lebanon directed against an Israeli patrol in the general area of Manara.

Hezbollah has vowed to retaliate for the killing of its fighters. On July 27, the Israeli military said it had thwarted an infiltration attempt by Hezbollah in a battle that raged for more than an hour. Neither side reported any casualties and Hezbollah denied involvement.

"I suggest that Hezbollah not try the crushing force of Israel. Hezbollah is once again endangering Lebanon with its aggression,” he said.

A Hezbollah official, who spoke to The Associated Press on condition of anonymity because he was not authorized to brief the media, said no Hezbollah positions were hit. He said shrapnel hit a structure belonging to Green Without Borders, an environmental NGO that Israel says is an arm of Hezbollah, allegations denied by the militants.

He would neither confirm nor deny that an attack had been launched from Lebanon.

Lebanon’s Higher Defense Council, the country’s top defense body, said it would file a complaint to the U.N. Security Council “over Israel’s aggressions on Lebanon last night." Israel also planned to complain to the council.

Tensions have also risen between Israel and Hamas, which rules the Gaza Strip. Hamas has orchestrated a wave of incendiary balloons and rocket attacks in recent weeks as it presses Israel to ease a blockade imposed on the group after it seized power from rival Palestinian forces in 2007.

Israel has responded with a wave of airstrikes and closed Gaza's only commercial crossing, forcing the territory's sole power plant to shut down last week and leaving most of the territory's 2 million residents with just four hours of electricity a day.

Israel and Hamas have fought three wars and several skirmishes over the last 13 years. Israel and Western countries consider both Hezbollah and Hamas to be terrorist groups.

“We will continue to work to restore complete quiet to our southern region,” Israeli Defense Minister Benny Gantz said. “In the north, we will not allow Nasrallah, who tried to harm our country but met with an alert and prepared army, we will not let him harm our soldiers or our country.”

Israel considers Hezbollah to be its toughest and most immediate threat. After battling Israel to a stalemate during a monthlong war in 2006, Hezbollah is believed to be far stronger today.

At the United Nations, spokesman Stephane Dujarric said Wednesday that UNIFIL has launched an investigation and called on both parties to fully cooperate with the probe.