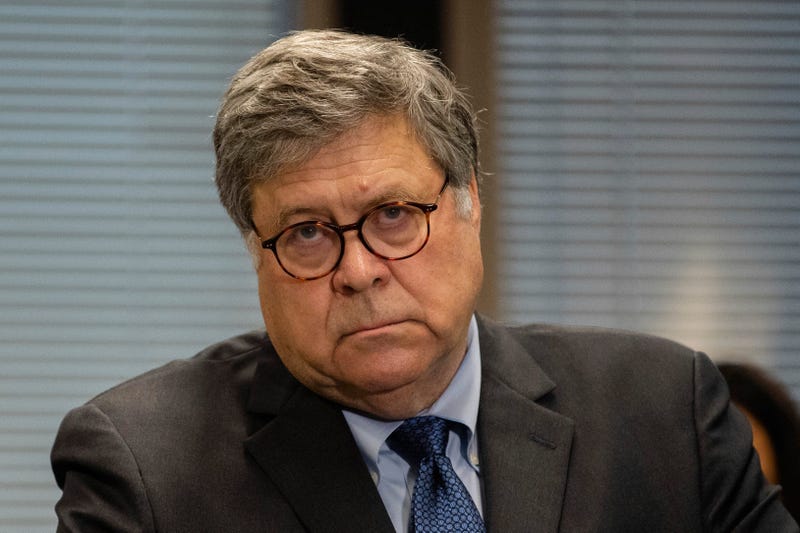 Photo credit Attorney General William Barr speaks during a press conference about Operation Legend at the Dirksen Federal Building Wednesday, Sept. 9, 2020, in Chicago. Barr said the operation was "critical in cutting Chicago's murder rate roughly in half since before the operation." (Pat Nabong/Chicago Sun-Times via AP)
By The Associated Press

WASHINGTON (AP) — Attorney General William Barr on Wednesday defended the Justice Department's move to intervene in a defamation lawsuit against President Donald Trump, even as experts were skeptical of the federal government's effort to protect the president in a seemingly private dispute.

The Justice Department’s action is “a normal application of the law. The law is clear. It is done frequently," Barr said at an unrelated news conference in Chicago.

He added, “The little tempest that is going on is largely because of the bizarre political environment in which we live.”

But experts said it's far from clear that the conduct at issue — whether Trump defamed E. Jean Carroll, a writer who accused him of raping her at a New York luxury department store in the 1990s — has anything to do with the scope of his White House duties. The department's move is likely to have an ancillary benefit for Trump in delaying the case, but administration lawyers have a tough task at hand trying to argue that the president was acting in his official capacity when he denied Carroll's allegations last year, experts say.

“I wouldn’t make such an argument, and if a president approached me to do it, I would say, ‘Don’t,’” said Stuart Gerson, who led the Justice Department’s Civil Division in President George H.W. Bush’s administration when Barr was attorney general for the first time.

“The president gets sued all the time and is defended by the government,” Gerson added, “but those are for lawsuits that have to do with actions in his official capacity as the president. This isn't anything like that.”

The Justice Department's action is consistent with the expansive view of executive authority it has taken under Barr and with its practice of taking legal positions benefiting the president's personal interests, including asking the Supreme Court just last month to allow him to block critics from his Twitter account. It is likely to deepen concerns from critics that the department is functioning as a private law firm for the president, with the attorney general as his personal lawyer, which Barr has adamantly denied.

In the Carroll case, the stakes are especially significant since a move to transfer the lawsuit from state to federal court could not only delay it but also lead to its dismissal since federal courts have not historically permitted defamation claims against federal employees for actions taken in their official capacity.

On Wednesday, Barr described the intervention as “somewhat routine" and said the normal process was followed in this case. He told NBC News in an interview broadcast Wednesday that he had been told the Justice Department's Civil Division was going to become involved and that he thought it was “fine” but did not have to personally sign off on it.

He cited the Westfall Act, which enables the Justice Department to be substituted as a defendant when federal employees are sued in state court for actions within the scope of their official duties, and for the case to be transferred to federal court, where recovery of damages may be more difficult.

For instance: The defense of a lawsuit against a postal worker who clips a car on a daily delivery route could be taken over by the federal government since the collision involved the mailman's official duties.

He pointed to the Justice Department's involvement more than a decade ago in the case of Rep. Cass Ballenger, R-N.C., who was sued for defamation by an American Muslim civil rights group. A judge in 2005 dismissed the case, ruling that Ballenger made the comments in his official capacity.

Legal experts say it's certainly not unusual for the federal government to seek to take over a state lawsuit against a federal employee, as the department is trying to do here.

But that doesn't resolve the question of whether the president was acting in the scope of his official duties when he is alleged to have defamed Carroll, nor is it clear that the same lawsuit protections covering federal employees under the Westfall Act also extend to the president, said Stephen Vladeck, a University of Texas law professor.

“If it's so clear and obvious and normal a case, why did DOJ wait so long” to get involved, he said. “If it was as routine as the attorney general wants us to believe, they would have filed the certification (to take over the case in federal court) the day after the lawsuit was filed.”

Despite the “suspicious” timing, Vladeck said, the actual arguments the department is advancing are not frivolous and are “not open and shut in either direction.” The department contends Trump was acting in his official capacity when he denied Carroll's allegations because he was “speaking to or responding to inquiries from the press, much as the elected officials in the cases cited above were speaking to the press or making other public statements at the time of their challenged actions.”

James Pfander, a Northwestern University professor, said Trump might consider it a win just getting the case moved from state to federal court, “where things might slow down and a judge more sympathetic to the president's claims might be presiding.”

Vladeck agreed, saying “Trump wins even if he loses." The Justice Department's abrupt intervention two months before the election slows the case down just as Trump was about “to be required to produce documents, provide a DNA sample, and sit for a deposition,” according to a statement from Carroll's attorney, Roberta Kaplan, who called the government's argument “shocking.”